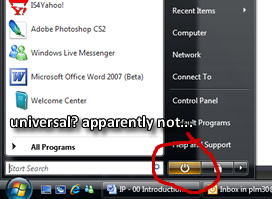 UAC is an acronym you will soon grow to hate. One of Vista’s major flaws for the competent or professional user is that Microsoft’s “we know what’s best for you” attitude evident in XP has grown expansively. It can be illustrated very simply in the image here. You will see the start menu with the instantly recognisable universal icon for “shut down”. Only in Vista it’s not. Instead it stores your session in memory and puts the machine to sleep. Now I know Microsoft are keen to promote the fast booting and low power consumption that its sleep mode offers but, especially with this laptop, often I just want to switch the damn thing off. Forcing me to click on a tiny arrow an select it from a list is not only unhelpful, it actually slows the process down. 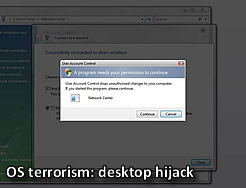 The major issue is the soon-to-be-loathed User Account Control system. It is designed to solve a very real problem — that of novice users running as administrators and inadvertantly opening their computer up to all sorts of malware because they don’t know what they are running. I, on the other hand, do. So forcing me to run in standard user mode and to ask me for permission every single time I perform an act like interacting with the Program Files folder is unnecessary. To ask me twice (a first popup warns that permission is required, a second actually asks for the requisite permission as well as a password if you are logged into another account) is unacceptable. Worse still the “secure desktop” proceeds to hijack my entire screen, fading out everything else and locking it, until I select a response. Drawing attention to a new window is fine, halting whatever I happen to be doing is not.

A neater solution to this problem is definitely needed because this intrusive system will likely lead to many users disabling UAC altogether. I should stress that many of these issues can be solved by tweaking the way in which UAC operates while retaining many of its security advantages. Ed Bott discusses these options as well as how Microsoft can save User Account Control as a concept.