Windows Vista RC1 (that’s Release Candidate 1) can be downloaded as an ISO (a DVD image that you can burn to a blank disc) from Microsoft for free by those interested in trialling it before the official launch next year. This is not a standard “guide to Vista”. Other sites like Paul Thurrott’s do it and do it better than I could in limited space here. Rather this will focus on a few points that grabbed my attention for better and for worse.

Not being a complete moron, I wasn’t about to make the unfinished Vista my only operating system, so I had to begin by partitioning my hard drive and creating a second primary partition from which Vista could boot. For reference you can also check the specs of the machine in question. 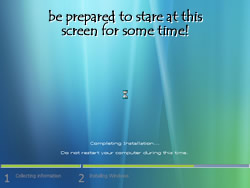 Smartly all the user involvement has been move to the start of the installation after which it takes care of itself while you sit back and relax. Or leave. Because this is slooow. You see this isn’t long in the XP go and make a cup of tea sense. This is more prepare a large dinner, eat it, drive to the gym and burn off all those extra calories, return home and shoot your dog because he’s now too old for life long. And then, magically, it’s done. I was wary of driver incompatibility, especially on a laptop, but to its credit Vista picked up my widescreen display and all the other peripherals with no trouble at all. I have yet to test bluetooth and wireless networking. 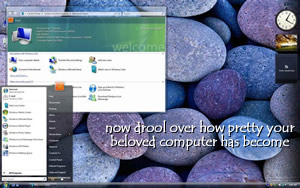 At first glance Vista is not earth-shattering: it looks like what it is, an upgraded version of XP. Instantly it is, however, very pretty. Aero’s translucency is a visual flourish that has been well executed and offers some exceptionally useful interface enhancements. Merging style with utility is something Apple were known for (and lost somehow with the Shuffle) and Microsoft seem to have grasped that the former alone is not enough. Switching windows or hovering over a taskbar item will now provide a preview of the window. Better yet, it’s a live preview so if you hover over a video player you’ll see the current video playing. The “switch between windows” view cascades you windows three dimensionally in a view even nicer than Tiger’s. The biggest UI change actually occurs in Office which will be discussed in depth at a later date.

Beauty comes at a price, of course, and that price is resource usage. A graphics card is a must for starters. Vista works fine on this machine but still occassionally feels sluggish despite the gig of RAM. In reality I would recommend a minimum of two for anyone intending to upgrade next year. For a new system to ever feel sluggish this early on after installation is worrying. Another culprit is the sidebar which provides gadgets for the desktop which Microsoft will be accused of stealing from Apple (who in turn stole it from Konfabulator). First impressions count and visually Vista should certainly impress, but next we’ll take a look under the hood at some of the new featues which justify the upgrade.