I suppose this deals largely with Office 2007 and not Vista directly, but UI change is likely to permeate future Microsoft products so it remains very relevant. Generally the change between iterations of Office requires some openess to new ways of doing things, but with an almost seamless transition in terms of UI. Many felt 2003 was an almost defunct purchase for only prettifying the icons (not quite true, but not far off either). The same can certainly not be said of 2007 which truly tears out the old interface and starts from scratch. The result is something far less intuitive than one might expect from a company that has dominated the office suite market for the past decade — be warned that most offices are going to require some retraining. 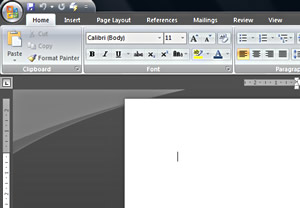 This is not to say the new “ribbon” method is bad, merely that the jarring change is surprising given how well and intuitively the old menu bar system worked. Although at first it appears intact, these buttons are no longer drop-down menus at all. Instead they change the set of visible icons in the ribbon below. It certainly looks nicer, and does speed up several tasks. Its greatest benefit is that styles are now much more readily accessible (with a single click instead of selecting from a drop-down list) and its prominent positioning is probably intended to convince users to utilise this useful function more liberally.

The downside is that it took me almost a minute just to work out how to open a document (although the keyboard shortcut remains the same). Without the familiar File menu, I eventually discovered that the big Office logo on the left is actually a button within which are hidden several major functions. Perhaps I was having a slow day, but if it took me that long to do something so basic I suspect many ohers will have trouble. I would suggest that an “open” button next to the conveiently located “save” button up at the top may not go amiss, but undoubtedly many more issues will arise until people settle into the new interface.

The other major plus is a new integrated document reader view for Word, which launches by default when reading things like email attachments. The lack of a reader app was one of my dad’s gripes with the product so I imagine many will find this extremely useful. It makes great use of the screen and as my use electronic texts only increases it should certainly save me from a little eyestrain!

Fonts are something to which most users will pay little attention but the new defaults included in Vista really are pretty special. Arial et al. are definitely a thing of the past now, with Cambria and Calibri providing a wonderfully clear serif and sans serif styles respectively at both large and small sizes. Indeed, all the new fonts scale remarkably well. Consolas provides a far more pleasant monospace experience too. The only real issue is that they all start with C — Calibri, Cambria, Candara, Consolas, Constantina, Corbel. I’m sure it sounded like a good idea at the time, but it’s already confusing me! It sounds odd to say but given the going rate for fonts these days, these are genuinely impressive enough to almost justify the cost of operating system alone.