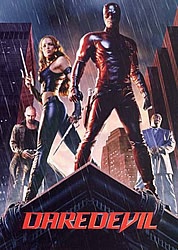 The greatest thing about Daredevil is it’s integrity to its source material, and yet in a way that also proved to be its downfall. From the opening moments the film reveals both it’s stylishness with our hero atop a church, wrapped around a stone cross, and also its darkness as we see him fall, injured, aided by a priest who seems oddly unsurprised by this occurance.

For those who don’t know the history of this admittedly less mainstream comicbook, Daredevil is the story of a superhero who was blinded in an toxic chemical accident, which greatly heightened his either four senses. His greatest skill is the ability to “see” through the sounds he hears (allowing for a nice “rain vision” special effect). After seeing his father murdered by underworld thugs, he becomes a crimefighter, by day as a successful lawyer in Hell’s Kitchen, and by night as a violent costumed superhero. 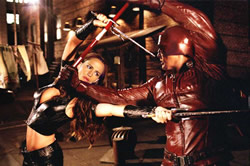 Daredevil’s [Ben Affleck] violent nature is the key feature that sets this film apart, for where most superheroes would disable, capture or trick bad guys into hurting one another, Daredevil is perfectly happy to kill criminals himself, often in a brutal manner. He has lost faith in the legal system’s justice, and yet it is much harder to condone his own brand through vigilante exploits to hunt down those who evade the court’s convictions, and it’s often difficult to decide whether we can really side with him at all. Indeed Murdoch’s life by day appears far more appealing than his nighttime excursions, as we are shown the unglamourised side of his superhero lifestyle as he returns home, popping pills and submerging himself underwater in a metal coffin-bed in order to close off his abilities and rest. This is definitely not your standard superhero film…

The extended forage into Daredevil’s past will not be to the taste of those hungering for immediate action. However, the intentionally slow buildup is essential for us to truly care about the character. His relationship with his father is expressed perfectly, his father painfully aware of his own failings while trying to instill a sense of right into his son. 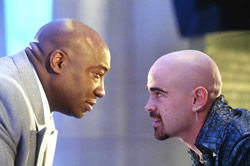 Once the background is complete, however, the film launches into a rather standard scenario, with very carricatured heroes and villains, especially Bullseye [Colin Farrel]. Farrel hams up the role to such a degree and with such charisma that he steals every scene he appears in. Indeed it is rather a let-down when Daredevil manages to beat him despite the fact he discover’s the hero’s weakness. Kingpin [Michael Clarke Duncan] as the crime-lord is a (physically) towering presence.

Elektra [Jennifer Garner] is another interesting role, providing both a love interest and an adversary for Daredevil, and Garner is smouldering throughout in both capacities. Unusually for a superhero’s girl, she is clearly able to look after herself, as she swiftly reveals when he makes his advances (although quite what possessed her to spar with a blind man is best left unasked). The chemistry between Matt and Elektra is brilliantly apparent, but the romance is not fleshed out as successfully, failing to show us why they care so deeply for one another. The support roles are wenderfully played by Jon Favreau as Matt’s law partner and friend, to the point where we genuinely want him to know the truth, and a rather underused Joe Pantoliano as the reporter following sightings of the mysterious vigilante hero. It is also refreshing to find a black villain after a long stretch of excessive “political correctness” that banished such things from our screens. A superhero movie rests, of course, on its star, and Affleck certainly looks suitably heroic in the dark crimson costume, and also gives Daredevil a human side, as a man feeling the pain of his position, prone to making mistakes and going too far.

The dialogue is simply superb, fresh and well-delivered, especially for a comicbook movie translation. However, this belies a rather serious lack of any real story, the movie’s gravest failing. Aside from his history, we are shown little more than Daredevil using his powers, the action dominates the plot. This is only a problem because, despite its impressive choreography, we are not really shown anything new, and there are more than passing similarities to the very recent Spiderman (not nearly enough time has passed for this to be considered homage rather than rip-off). The dark filming style creates a very different feel, however, developing a more adult atmosphere. Hell’s Kitchen tends to feel sterile by day, much like Gotham City. This “noir” style is the biggest payoff of the film, and what ultimately sets it appart, since not even Schumacher’s recent Batman attempts achieved this.

So Daredevil returns to the dark visual stylishness of Tim Burton’s Batman, but is let down through a patchy storyline and action sequences that often appear all too familiar. However, through loyalty to the comicbook, the central character (almost an anti-hero at times) is alluring and charismatic, so while we question whether it is justice or vengeance he is drawn towards, we cannot help but be intrigued by this darker and perhaps more adult approach to the standard superhero film.