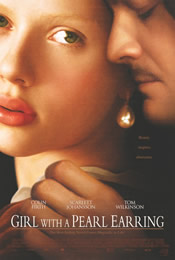 Intense and mesmerising, Girl with a Pearl Earring is an incredibly subtle film about Vermeer’s inspiration for the painting in question. It is a work of speculative fiction (adapted from Tracy Chevalier’s novel) since little is actually known about the model at all. As such, it could so easily have gone very wrong, but is succeeds, and indeed shines, through the way it never becomes overly melodramatic, nor produces lurid revelations about a possible relationship. Instead, in perfect period style, it remains subdued and reflective, while being incredibly intimate at the same time.

In Holland around 1665, Griet [Scarlett Johannson] takes a job as a maid once her blind father is no longer able to work. The household in which she finds employment is that of master painter Johannes Vermeer [Colin Firth]. Though not educated, Griet has an understanding of Vermeer’s art and talent which draws the two together, and finally Vermeer decides that Griet is to be the subject of his next painting.

Although Vermeer is clearly attracted to Griet, a beautiful but reticently modest girl, we are not here to witness a scandalous extra-marital sexual affair. Indeed the two barely even touch throughout the entire piece. But that makes the momentary visual connections infinitely more intimate. 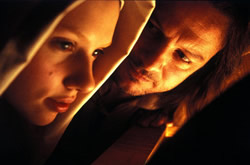 As a film about an artist and painting, I had expected strong use of bold colours but in fact the appearance is very washed out. This certainly fits the period mood of seventeenth century Holland, but more importantly allows Eduardo Serra’s cinematography to focus on use of rich light and shadows that perfectly compliments (and to a degree pays homage to) Vermeer’s own style. The incredible attention to detail, in both the set design and the way in which they are lit, is one of the focal points of this film. Technical subtleties like focus shifting become incredibly symbolic as in the scene with Griet and Vermeer together mixing paints in silence in his studio.

The storyline is simple and uncluttered, with there are no subplots to draw attention away from the films focus, but equally this means the pace is painstakingly slow. But the reward are the moments of incredible intensity when we see the two characters alone together, beginning with the camera obscura, and climaxing as Vermeer pierces Griet’s ear in an obviously symbolic act representing the sexual intimacy that they know will never be consummated. 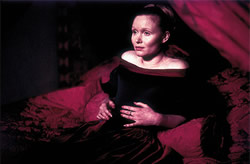 Johansson’s performance as Griet is astounding (further casting a dark light over the Academy who failed to nominate her for an Oscar for either this or her other recent masterful performance in Lost in Translation). She captures Griet’s curiosity as she discovers her own intuitive ability to appreciate and understand art, which is what draws Vermeer to her. She becomes his muse, inspiring some paintings, and even improving them. In a flawlessly touching sequence she stares at the canvas of Vermeer’s half-completed work, then adjusts a chair in the scene. Later we see Vermeer, moved by her observation, has also removed the chair from his painting.

Colin Firth is enigmatic and convincing as the teacher Griet is drawn to. However, his understated acting does occasionally loses its charisma. Tom Wilkinson has the opposite effect with his leering, charismatically dispicable role of Vermeer’s patron, obsessively attracted to Griet himself. Essie Davis as Vermeer’s wife brilliantly portrays her frustration as she feels overshadowed by the presence of her mother, the talent of her husband, and soon by Griet too.

Visually moving, the story being told is simple but powerful as the two figures make an intellectual connection, an unfulfilled romance emerges from mutual respect, in an impossible situation. Although beautifully filmed, much of the 95 minutes is not hugely memorable, but instead builds up to the occasional moments that are genuinely breathtaking and have an indescribable intensity as we share in the connection between Griet and Vermeer, and these scenes show just how powerful the medium can be.