“Love your past, but travel on.”

Stop-motion animation is a wonderful art form, largely abandoned in the digital age, and I certainly applaud its use in films with an adult audience in mind rather than just family fare. The House is really a collection of three films from different directors, loosely connected by the same building. They vary in tone though there is a dark, horror-like element to each tale. The first is overt gothic horror about the family for whom the house was built, the second is a Kafka-inspired nightmare of a renovation project, and the third is a more contemplative tale of how other people can support us, hold us back, and sometimes gives us the nudge we need to move forward. As written, however, each of these would have worked better as 15-minute short films; even at around 30 minutes, all three feature repetitive scenes that serve little purpose than to pad out the running time. The art direction still offers much to appreciate, like first tale’s unusually stylised small faces on large heads. Meanwhile the animal character design in the later films share more in common with Wes Anderson’s stop-motion fare. Overall it The House’s ambition to feature-length which renders it a frustratingly uneven experience.

“It’s one thing to go around saying what you want. The test comes when you are actually given the chance to get it. When they wanted to get rid of Margaret Thatcher, John Major got toothache so he didn’t have to answer his phone. A week later he was prime minister.”

If Turks & Caicos was Worricker treading (Caribbean) water, Salting the Battlefield moves at full pace as he and Margot are on the run in Germany before returning to the UK to confront their hunters. This provides a far stronger backdrop for the trilogy’s political machinations. Ralph Fiennes’ prime minister always provided the most compelling adversary to Worricker, aided by his zealous personal conviction — Hare’s script draws clear parallels with Tony Blair’s ambitions as a statesman. In contrast to the earlier films, Nighy’s charm deliberately slips as Worricker finds himself on the warpath and often outmanoeuvred. The story’s conclusion is not entirely predictable despite leaning into a number of tropes, though ultimately it feels more satisfying if you view the Worricker trilogy as a character study of its protagonist rather than focusing on the overarching narrative. 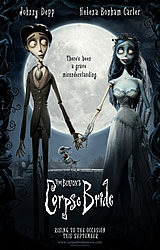 Ever since The Nightmare Before Christmas, Burton aficionados have been waiting for a return to his quirky stop-motion world. That’s not quite what Corpse Bride offers, but it does serve as a reassuring sign, along with the recent Wallace and Grommit release from stop-motion masters Aardman, that the art form still has life (and more than a little death) in it yet.

The film retells a classic Ukrainian folklore tale of a young man named Victor Van Dort [Johnny Depp] whose marriage to Victoria Everglott [Emily Watson] has been engineered by their parents to save the two families. Victor is a well meaning but utterly inept chap who, having discovered Victoria is in fact the girl of his dreams, gets cold feet after embarassing himself at the wedding rehearsal. Running off into the woods, through a “grave misunderstanding”, he accidentally marries the Corpse Bride [Helena Bonham-Carter] instead. Finding himself trapped in the underworld, he must fight his way back to the land of the living to be with his true love.

The voice acting in this film is first class, but what really makes it special is that despite a cast of big-name actors (including a host of Burton regulars), none of them are recognisable. We are not treated to the usual Madagascar-esque mediocrity where actors play themselves as is so common when A-list actors find themselves working in animated features. Rather, one would not even notice Depp’s presence as the lead were his name not thrust upon the screen. This anonymity serves incredibly well in avoiding detracting from the characters and the style.

Visually beautifully macabre, the animation itself is flawless in its fluidity, and seems so smooth that one could often mistake it for a digital creation (indeed it looks far better than most of this year’s lacklustre digital fare). The designs are inimitably Burtonesque with awkwardly skewed architecture, gangly limbs and big expressive eyes. However the characters themselves seem utterly two-dimensional, with the possible exception of the Corpse Bride herself, eerily alluring to the point where we find ourselves hoping Victor will stay with her since she stands out from a slightly bland canvas. This being a kids movie, the question of necrophilia is thankfully left alone, settling for a tender approach to Victor and the Corpse Bride’s tragic situation. Meanwhile the dark humour follows the traditional mix of slapstick for the youngsters and wry satire for the more mature audience members, succeeding admirably on both counts.

Danny Elfman’s decent musical numbers, while much improved upon arriving in the land of the dead (where the visuals are infused with more warmth too), lack the colourful and charismatic composition that made his offerings in Nightmare so memorable. Indeed, this feeling permeates much of the proceedings, as everything which made the last outing so energetic here feels competent but somehow muted. It’s the sort of family film that Disney will be very happy to have produced but will leave Burton fans a little disappointed due to their understandably high expectations and the undeniably good but altogether safe result.