You Can’t Save Them All 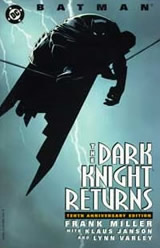 I finally saw Batman Begins (or “Batman Biggins” as Tom G affectionately refers to it) and it got me thinking. All these superheroes have such a hard time with their dual identities because they never seem to realise that it’s an impossible task. Batman is the prime example of this as a man who becomes consumed by his alter ego so that Bruce Wayne essentially disappears (made clearest in the closing of this film and Frank Miller’s graphic novel The Dark Knight Returns where Wayne becomes himself for a period after retiring Batman). Much as we may try to compartmentalise our lives, there will always be bleed through, there will always be blurred edges, because there’s always one common denominator: us.

Superheroes never seem to understand this. If you choose to take on a mantle like that, you lose whatever other life you had. Holding on to them both doesn’t work, you need to choose which you want to be. This doesn’t mean a hero can’t have friends or lovers, it just means they have to come to terms with putting at risk those about whom they care. Strangely, it’s the more simple-minded characters who seem to understand that. Hellboy always seemed painfully aware of what he was, and hated himself for it. Of course, in his case, saving the world was never really his choice, it was just what he did.

Last term I was accused of trying to save everyone. I wish I could say that person was wrong, but the truth is I’m not really sure. Trying to save them all will never work, you’ll always end up failing. But it’s something to strive towards, right? Maybe. But you begin to lose perspective, the reason each one is worth saving in the first place. They become statistics. Oskar Schindler breaks down at the end of Schindler’s List, crying for those extra Jews he could have saved, “at least one more”. But when what you’re saving no longer has a name, when it becomes a number, you’ve already lost.

I think the hardest lesson for any hero to learn isn’t the sacrifice or the life you lose; they should be prepared for that already. It’s that you can’t save them all.

“Whoever saves one life, saves the world entire.” – The Talmud