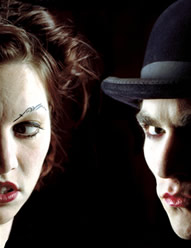 I had a chance to hear the forthcoming new offering from the Dresden Dolls (now signed to Roudrunner), titled Yes, Virginia. The name is a reference to the most reprinted newspaper editorial in history, a response to an eight-year-old girl’s inquisitive doubts about the existence of Santa Claus. The kindly editor Francis Pharcellus Church assuaged her fears, assuring her that Santa Claus was quite real. But then again, so’s Cthulu.

I first saw the Dolls when they supported Nine Inch Nails on the With_Teeth pre-release tour. Something about their sound crept under my skin immediately. In some ways their ecclectic stageshow can detract from their music, with their unnecessary penchant for removing their clothes (though fortunately not when I saw them). Visually though, their appearance and act is definitely inventive and drummer Brian is particularly enigmatic. 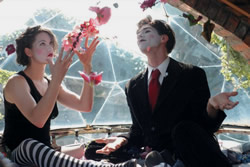 The style, which they classify as Brechtian punk cabaret, shines through on the new album and from the cheerfully tongue-in-cheek opener about sex changes it’s quite clear they’re up to their old tricks. As lyrically and rhythmically creative as their last release with clever wordplay that belies an acute understanding, it shares many of the same flaws too. While its occasional peaks soar, the rest varies from competent to dull — their slower numbers are far less successful than previous examples. When they can actually produce a truly consistent record, they’ll certainly be a force to be reckoned with. For the time being though, Yes, Virginia, while not nearly living up to their self-titled debut, is still worth a spin. Due April 17th.