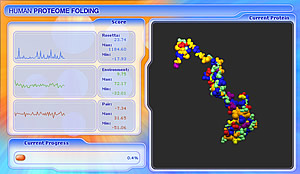 I had been meaning to join The Grid for several months and finally got round to it today. For students who tend to leave their computers on all day anyway, it’s a great project to get involved with. Set up by IBM, the idea was to create a distributed public computing grid that could collectively engage resources in research projects that could otherwise take decades without major funding. The scheme works by downloading a small program which contacts a server and collects a task. When you wander off to your three hours of lectures and your computer is sitting idle, it starts up and uses those free processing cycles to start crunching through the data and submitting back the results when it’s done. In this way the community of volunteers are able to produce years worth of calculations on a conventional computer every day.

Currently efforts are being directed towards the Human Proteome Folding Project. As a logical progression after the completion of the human genome map, we now need to find what all those proteins do, in order to develop effective treatments for related diseases. The goal of the project is to predict the structures of unknown proteins and how they are likely to fold. By collecting structures and functions for a huge number of proteins, biomedical researchers can then access this database of information to find functional clues about these mystery proteins when they come across them. And it’s rather satisfying when your first task hits 100% and is submitted, rewarding you with 93 points (a crediting system so that people can group together and keep track of how much they have collectively contributed, including one for Cambridge University).

Doing Things By The Bottle