I am writing this from a computer in Baton Rouge, Louisiana which will come as something of a surprise to many of you. I had been planning to visit sometime this summer but the final arrangements were extremely spur of the moment, having almost abandoned the idea due to inflated ticket prices and other commitments. It being last minute anyway I arranged a roof over my head with the Dixons but declined to tell anyone else of my plans. I like to keep people on their toes.

And so on Friday I was able to stand in the doorway of Jenna’s apartment and watch her expression transform as she tried to fathom exactly why her cousin was not several thousand miles away. Or rather in her state of shock, as she explained later, whether I would be staying the night. Her newborn baby Clark was the major driving force behind my trip and he is as cute as one would expect, and good deal better behaved. I first met Karleigh when she was around three months old so this was a very different experience. At just a few weeks he is perhaps less interesting, although Karleigh’s wonderfully sweet attempts to take care of him make up for this. 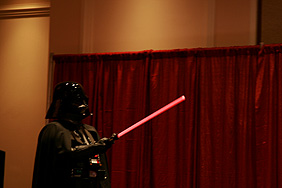 In a fashion befitting my surprise visit we shortly took off to Natchez, a town in Mississippi where my aunt and uncle have bought a new house. Other notable events include eating tamales and buying around forty cans of spray paint at Wal-Mart with Dave, which strangely caused no problem with staff but attracted several questions from concerned shoppers. We’re vandals looking to join a gang, we explained. In fact the supplies were for an art event Dave is hosting at the house in a week. Finally, curiosity piqued by its schedule, a few of us also popped into the tail end of local cult festival BabelCon, dropping in on a lightsaber fighting demonstration.