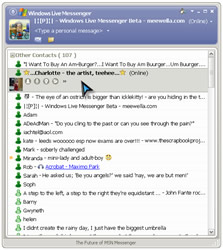 I’ve been trialling a beta version of Microsoft’s latest messaging client to replace MSN Messenger. Bearing the slightly unwieldly new moniker of Windows Live Messenger, it will feel familiar but is a significant jump up from the current version. For those who like to mod their MSN, the constant stream of updates has actually been something of an annoyance. Nevertheless this looks like one that might actually be worth it.

The interface is much cleaner and, although the change (particularly to your contacts list) is jarring at first, you will find yourself adapting to it shortly. Amongst new features include integrated free PC-to-PC VoIP calls, a new “shared folders” system for photos and other files which allows you to share files from a single folder with drag-and-drop ease, and at last offline messaging which allows you to leave a message to be viewed by your contact when they next log on. Perhaps chief amongst the changes is the death of the butterfly. As it is no longer an MSN product, instead part of the new Live series, the familiar butterfly logo is no more.

I am actually running it concurrently with 7.5, which remains my primary chat client, since this beta is not quite powerful enough to replace it. Admittedly this is rather more to do with the fact that I use the Messenger Plus! add-on, and a new version for Live (which includes XHTML chat logging) is not due out until the program’s official release.

In related releases, the populat Spleak chatbot has now been officially recognised by Microsoft and rather than downloading it, you can chat to her directly by simply adding spleak[at]hotmail.com to your contacts list. She’s hooked up to various websites so while chatting to her she’ll act as a digital assistant of sorts, providing spell checks and encyclopedia entries, as well as telling you the time or weather anywhere in the world, converting between units, and even keeping a personalised event calendar for you. See the future of antisocial socialising now.