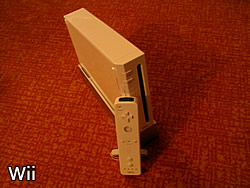 As I’ve said previously, I have never played the launch game before, so there is a sense of accomplishment in snagging a Wii for my sister on the day of release. Although I knew of them by reputation, I had not used Gameplay before and have been extremely impressed by their level of communication throughout the preorder and launch period. The unit itself is sleek and tiny compared to its bulkier next-gen cousins, although conversely the Wiimote is slightly larger than it looks in photos. I was pleasantly surprised that despite its quirky design installation was a snap. Strangely the sensor bar required no calibration at all, aside from stating whether it had been placed below or above the television.

The console ships with the Wii Sports game included, a great showcase for the new controller and actually great family fun too, although it requires several controllers to properly enjoy as a group activity. As well as attracting a wider audience to videogaming, the new control mechanics prove a great leveller. In the first few minutes I felt absolutely rubbish at it (while thoroughly enjoying myself) and my sister was delighted at beating me. It was Romina who pointed out that I was trying to understand the control system when I should really let go and “just play tennis“. She was right. For games of that ilk it is remarkably intuitive in that respect, and bowling in particular is guaranteed hit — alleys ought to be worried, particularly with the ability to populate the game with cartoonish but recognisable avatars of you and your friends, each called a “Mii”. 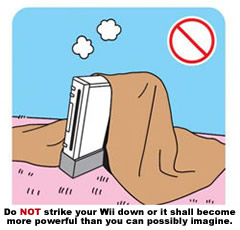 Wii then moved on to Zelda which demonstrates the console’s “proper” gameplay. Undoubtedly some of the control usage is a gimmick and fishing swiftly becomes infuriating, but generally it is surprisingly easy to use in everything from horseriding to swordplay. The graphics are certainly not on par with its rivals, and nor are they meant to be. It is a significant step up from the GameCube and Zelda in particular shows the polish that good artistic direction can produce even without the raw graphical power at which the competition excel. Any complaints? One is that although the speaker contained within the Wiimote is a nice touch adding a little more depth to sound cues, it delivers a poor quality, tinny sound which can be quite out of place if you have a decent speaker setup. Another is that having only a single analogue stick can cause some camera control issues. But these are minor quibbles when this system is just so much damn fun. Nintendo’s idea of fun is evident in warning images that have emerged from the console’s Japanese manual, resulting in a flood of “subtitles” by various fans, my favourite being the above. 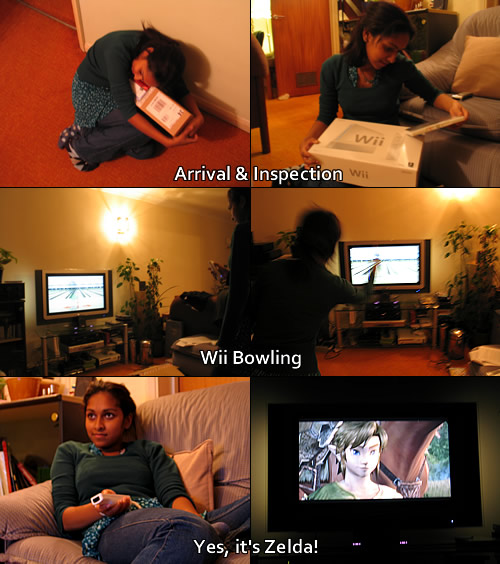