What Would Tyler Durden Do?

Rumors have swirled all week after Carmen’s birthday party last Saturday, when Navarro left alone at 2 AM while Carmen hung around until 4, but most claim problems began the day she realized they were both b-list lunatics, but she looks like Carmen Electra and he looks like a gay cartoon devil.
–WWTDD

I’m not normally one for celebrity gossip, but when it’s presented in as caustic and amusing a style as WWTDD (that’s What Would Tyler Durden Do), even I see the draw. Updated with around 3 or 4 new stories a day, it’s a great site aside from some slightly suspect CSS. A nifty feature is that the sidebar on the right lists many of the celebrities regularly written about so you can click to see all the stories about your (least) favourite celebrity. Bursting the celebrity bubble with panache. Unsurprisingly, scientologist nutcase and part-time actor Tom Cruise features heavily. 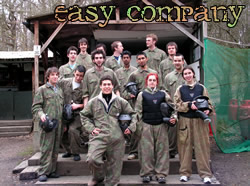 Phil H mailed out a photo from last week’s paintballing trip so you can see the gang all geared up. I opted for the photo sans headgear since otherwise we could be anyone. At this size detail in group photos is scant, but if you were there I imagine you can fill in the gaps for yourselves. I’m the one in the second row holding the severed head of an enemy combatant. Or possibly my mask. Who can truly know?

Moving back to Cambridge was relatively painless in itself but the requisite workload that accompanies it on arrival is somewhat less appealing. I was buoyed somewhat by the surprise package of a DVD copy of A Lot Like Love, courtesy of Empire magazine. Although overtly a typical romantic comedy involving a series of chance encounters, it succeeds due to the believable, quirky chemistry between its leads. This is particularly surprising given that one of them is the generally unimpressive Ashton Kutcher and the other is hit-and-miss Amanda Peet. I recall considering it unexpectedly decent when I saw it last year.