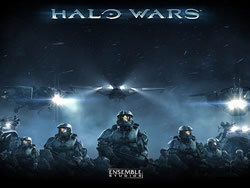 Such was the official answer as to why a real-time strategy game set in the Halo universe ought to be made (by Age of Empires developer Ensemble Studios), and little more need be said really. Bungie had said there would be big news at Microsoft’s X06 show in Barcelona and indeed there was, in impressive cinematic form. The trailer stakes it territory well and the words “Spartan Group Omega” will widen the eyes of any Halo fan, probably combined with a rather stupid grin.

The X06 show marked the crowning achievement in a great first year for Microsoft’s new console. After a bout of console issues at launch they have now hit their stride and are able to focus on games. Sony’s presence at TGS, meanwhile, was so lacklustre as to be bizarre. They essentially danced around the topic of games, with a press conference that consisted largely of explaining how lovely this technology called “teh internets” is. They did, however, provide the first truly impressive PS3 gameplay trailer in White Knight Story. Towards the end I was unsure how much was in-game and how much was cutscene, but the very fact I was confused bodes well. Still, the lack of standout games (aside from the obvious Metal Gear Solid) must be unsettling for fans.

Nintendo’s notably low key presence at Japan’s biggest gamming show is puzzling, and many speculate must date back to an old feud (TGS killed all its family and a blood feud was begat or some such). Meanwhile, Microsoft’s other scoop was unveiling the first gameplay footage of Assassin’s Creed running, of course, on the 360. One hopes its impressive wall-scaling escapades should quell TomTom’s penchant for climbing things that should not be climbed. But it probably won’t.