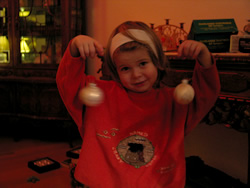 Although my flight to Germany was delayed by several hours due to foggy conditions and Gatwick supporting a swathe of redirected flights from Stanstead, it seems that this is actually to be considered rather fortunate. Kirsten informs me that over the following two days several hundred flights to Germany were cancelled as the fog thickened. Once here I was fairly exhausted so did not manage to check out Hamburg’s legendary Christmas market. One of my fellow passengers on the plane was an ardent proponent of the event which, unlike my original understanding, features little shopping and rather more Glühwein (literally “glowing wine” and not Glugwein as some foreigners mishear it) and food. 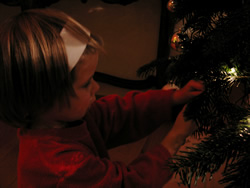 Yesterday I put up the Weihnachtsbaum (Christmas tree) with Nele and Kirsten. Although Kirsten is entirely set on real trees, the downside stretches beyond merely dropping needles everywhere — this one didn’t even fit in its base. What this actually involved was her father gesturing to the tree, handing me his “best saw” and being told to go for it. I would love to say that hilarity ensued, but actually sawing away with virile vigour I think I got the job done admirably. Once it was opened up we found it was what Kirsten described as “rather asymmetrical”. My explanation that this is what real trees look like didn’t go down terribly well. Decorating the tree was a somewhat less energetic enterprise than hacking bits off. Nele could only reach the lower branches so required some adult aid, while the lights required replacing a bulb before more than two thirds agreed to operate. The end result was a pretty, homely tree. 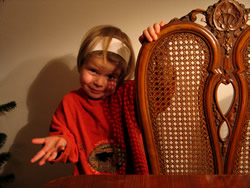 Kirsten and I spent this evening at a secluded woodland hotel booked by her parents as a Christmas present. She was treated to a massage and the dubious joy of having various substances of apparent health qualities liberally applied to her face. I declined hoping for a pre-dinner shower only to discover the water had been turned off. Dinner itself was an awesome four-course affair at a restaurant several minutes drive away but owned by the same people.

And on an unrelated note, Industrial Light & Magic have created an interesting mini-site showcasing the special effects in Dead Man’s Chest, the Pirates sequel. An interesting look at just how far the fusion between animatronics and digital animation has progressed, of particular interest is the quiz testing your eye at distinguishing between real and digital scenes.