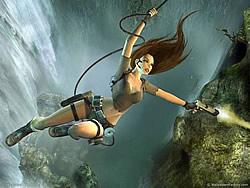 Continuing our tradition of sampling game demos so that you don’t have to invest the time yourself, here are our thoughts on the latest contenders. First up is the highly publicised return of Lara Croft in Tomb Raider: Legend. I was first introduced to the series around Tomb Raider 3 and found it an interesting but unfulfilling experience. It sounds as though everything after the first two were really shoddy knock-off sequels all based on the original game engine. The most obvious change in Legend is visual. New developer Crystal Dynamics has created a brand new engine which looks and feels truly next-gen. Miss Croft is equipped with a range of new acrobatic maneouvres, all fluidly modelled. Whilst the game’s titular tomb-raiding and puzzle solving are stunning and have some real depth, the gunplay still leaves something to be desired. Lara’s signature twin pistols are your default option with the benefit of unlimited ammo. She can acquire more powerful weapons from foes, but must then conserve her ammo. Overall the simplistic target locking and shooting doesn’t feel quite right on a PC although it may better suited to the console environment. The first important update to ther series in a long while, if third person action is your thing then its legendary heroine has returned looking more stunning than ever.

SpellForce 2: Shadow Wars aims to fuse the RPG and RTS in a continuation of the approach Blizzard implemented in Warcraft 3. Your main character and party members level up under your guidance, while other heroes can join you temporarily. For major battles you must then command larger forces, led by your hero. However, it fails to feel quite so epic as it ought.

Battle For Middle Earth 2 looks much like, well, Battle For Middle Earth actually. The most notable changes is that the license has expanded to include the books as well as the films, offering a wealth of new source material including Tom Bombadil. That alone will sell it to many fans. The combination of massive armies with impressive variety creates a truly epic fantasy environment, while looking as good as its predecessor. 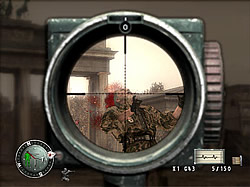 Finally, Sniper Elite is the first FPS for a long while to create a genuinely new experience. Punishing any attempt to charge in guns blazing, the game has the player crawling through crumbling World War 2 battlefields, searching out vantage points from which to eliminate the enemy at long range (and there’s nothing quite so rewarding as a slow-motion follow-the-bullet replay of a carefully executed headshot). The constant tension is palpable, with the continued roar of distance gunfire and shells gouging new craters around you, though one might argue the timely strains of creepy music are not strictly in accordance with canon. I’d recommend this even if, like me, military sims aren’t usually your thing.