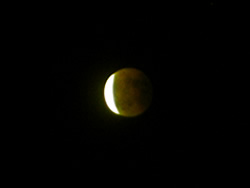 I can’t remember exactly what is supposed to happen when a lunar eclipse coincides with a full moon but I’m pretty sure it involves werewolves, Halle Berry and NAMBLA. And possibly Hugh Jackman — I always found him unnaturally furry. Anyway, here’s a photo from last night taken from my window. It’s something of a novelty being able to take a photo of the night sky in Cambridge since London has rather too much light pollution for anything to actually show up.

is finally coming to DVD this side of the Atlantic, where it has been notably absent despite being a BBC series. A modern fantasy tale set around London, it’s well worth a look and will be out in April. Unfortunately, despite all the time they have had, it does not look like it comes replete with scores of extra features but hopefully it will at least contain Neil’s commentary from the American release. 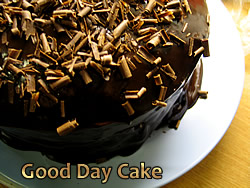 Meanwhile Angie decided to cheer up the corridor on Friday by baking us all a gigantic chocolate cake. Funnily enough it worked. Every university student quickly discovers that it is vitally important to have a strategically placed friend who finds baking therapeutic. We’re fortunate in K to have multiple sanity chefs which means regular delicious culinary freebies such as this. As a result we tend to follow the Klingon maxim: today is a good day to dine. Okay, so it’s not exactly verbatim but it’s certainly tastier.

I have a new favourite trailer. It’s for a game, the latest instalment of the Battlefield franchise, Bad Company. It is, shall we say, somewhat self aware…

The Mole, The Mob & The Meatball