There is no pre-defined formula for the complaint but then, being British, it’s something we’re not particularly good at anyway. Grumbling, now that’s a different matter, but outright complaints are considered to rank amongst the excesses usually labelled “nuisances”. I mention this because Cat informed me that she was writing a letter of complaint to Alton Towers. Now, I always thought my Aunty Manel in the States had this fine art perfected but Cat has gone one step further — she hasn’t actually been to Alton Towers*. That’s efficiency the Germans would covet. 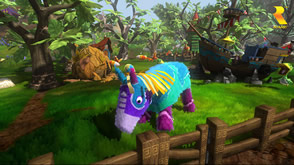 For those who follow Rare’s games, the bizarre premise of their current project, tending garden on an island inhabited by sentient piñatas, is probably not that shocking. They are, after all, the people who brought you Conker, the foul-mouthed alcoholic squirrel. Now its the more child-friendly Viva Piñata! One of the most creative developers in the industry, this game is preceded by a kids TV show that has just started to air. Imagine a Pixar TV show and you’ll have some idea. Rare’s visual flair is spot on in producing a wacky style that complements their content and there are enough cheeky adult asides to justify watching to your friends. You can see the first two episodes right now.

And finally if you are a My Vitriol fan (and if you aren’t you should be) they are finally doing a show this year — but just one. It’s Friday 24th November @ KOKO in Camden. Tickets here. Check it, as they say.

*There was, it transpired, a legitimate reason involving their booking system.