The updated Xbox 360 Elite console is now in the wild with photos flooding the internet as eager journalists get their paws on them. Engadget performed the most interesting test, however, which was comparing the image quality with the standard version. Their conclusion was, as I had predicted, that it is nigh impossible to distinguish between 1080p over HDMI and 1080i over component connections. To Microsoft’s credit they are not targeting this new release at existing Xbox owners, but rather for new-comers who want to move straight to the high-end large-drive version. I suspect the real reason is that they are well aware that their file transfer is still crippled if you move between machines.

Buying the standalone 120GB drive will cause you no problems but because licensed downloadable content is locked to both your Xbox Live ID and your console ID, it will only work on a new console if you are logged in at the time. In an explanatory video at Major Nelson’s site, Albert insultingly describes the “handful of people who might face a unique scenario” if they are not logged in. In essence he has just discounted anyone who does not keep their console internet connected 24/7 as lesser customers. Sorry, unique customers. I suspect that behind his nonchalant attitude he knows full well he was talking rubbish and that far more than “a handful” will be affected by this but is required to peddle the company line. The video has attracted a large number of disgruntled comments. Maybe Albert has very big hands, or maybe it’s based on the fact he did not seem to consider it a problem and appeared unhurried in developing a solution. While it may not be a huge issue yet, these consoles can and do break and many will need to replace theirs (and many of those who bought at launch already have). If Microsoft’s DRM is so short-sighted that it cannot handle this obvious eventuality it places a huge question mark over the quality of their downloads service. Whether it is by a process to “unlock” licensed content or something else, this one needs to be dealt with fast. 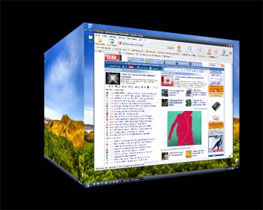 And now an exam term top tip (ET³) for those who have trouble with self-control while sitting in front of your computer: the distractionless desktop. The simplest way to do this is to create a new user account and strip out everything non-work related from the desktop and start menu so that it’s just plain difficult to distract yourself. A slightly sleeker solution that still allows you to switch back to other tasks with relative ease is the multiple desktop solution. Using a program like Dexpot you can create additional virtual desktops for you machine and easily move between them. Create a new, plain workspace desktop, with a vanilla wallpaper and free of clutter. You will likely find your productivity increasing fast without web browsers, chat windows and email distracting you. Alternatively Yod’m 3D (pictured) provides a similar feature with less customisation but a pretty animation as you rotate a cube to access additional desktops.