Apologies for my absence but little worth mentioning has happened in the last week. What little did occur was largely underwhelming. Except for the “pranking” of Presidential hopeful John McCain’s MySpace that is. That was what we in the industry call pure gold.

The Elite has officially become gaming’s worst kept secret, being announced pretty much exactly as I stated last post. It’s a decidedly underwhelming offering since pure gamers don’t really need the massive 120GB and HDMI alone hardly justifies the higher price. Meanwhile those using it as a media hub will still find it lacking wireless connectivity or an internal HD-DVD drive (though with the format war undecided this is not necessarily a bad thing). On the other hand, it still costs less than the “cheap” model of the PS3. Buying the standalone hard drive seems like the preferable option. 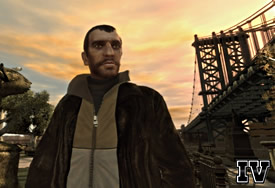 Meanwhile Take 2 launched a debut trailer for Grand Theft Auto IV. Unfortunately they decided to milk the affair without taking proper precautions. Placing a countdown clock ticking away the seconds a month before your trailer is released pretty much guarantees that hordes of fans will be there the moment the timer ends so having a single machine powered by a gerbil on a running wheel is hardly going to cut it. Unsurprisingly their servers collapsed in a not very spectacular heap. More impressive was the resulting shockwave that took down a clutch of major gaming sites for a few minutes as people struggled to find alternative sources. “I felt a great disturbance in the web, as if millions of GTA fans cried out in terror and were suddenly silenced,” commented Ben Kenobi. The trailer itself was distinctly lacking in content given the insane levels of hype. The engine looks fantastic, set in what seems to be modern day New York. The player takes on the role of an Eastern European immigrant, a happy change from the previous black gangster rap route. The satirical humour is still there with tongue in cheek adverts for Heart Stopper Burger and TV show America’s Next Top Hooker. Yet with no evidence of gameplay or further plot/content it’s difficult to say much beyond “it looks very pretty”.

My Uncle Majela has taken a leaf out of the respective books of the Queen and my mother, finding his 50th birthday fell on an inconvenient date and so “postponing” it until an official birthday this weekend. That means you can look forward to some cute photos of Sebastian doing whatever it is tykes of his age do. You know, tyking.