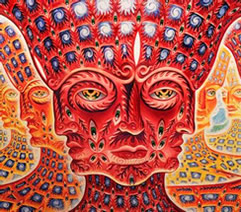 It being official release day, I’ve been proudly wearing a Tool t-shirt all day, although I’ve had my hands on the new 10,000 Days album since Saturday. Tool albums are complicated affairs and it took me some time to appreciate the subtler nuances of Lateralus (second only to Thirteenth Step and The Downward Spiral) but I’ve had enough time to form my first impressions on their new opus. Looking first at the packaging, givent the last two releases I was hoping for another high-quality innovative design and they have delivered with more of Adam Grey’s fantastic artwork, this time appearing 3-dimensional when viewed through the attached stereoscopic lenses. If you are not familiar with Grey’s work, I suggest you check out the Chapel of Sacred Mirrors immediately.

Vicarious is an excellent opener as an almost perfect continuation of the Lateralus-era Tool sound making it instantly accessible to fans. The usual progression between Tool albums is then found throughout the remainder of the album from the moment Adam Jones’ guitars kick into Jambi, dominating with an insistant power while Maynard’s vocals fall back to a more minor role. Indeed it is the vocal changes that dissidents will find jarring, particularly the very different style featured in The Pot. The core of the album consists of Wings For Marie and 10,000 Days, the former really an introduction to the latter. Together they form a 17 minute epic that stands as a vulnerably honest triumph, as Maynard sings of his mother’s unfaltering faith despite her paralysis for 27 years (approx. 10,000 days) and of the ascension she deserves. Rosetta Stoned is the album’s heaviest track and probably the most musically complex, while Right In Two provides a simple (the lyrics are less veiled this time round, though still powerful) description of angels looking down upon humans. Less heavy but with a rythmic intensity running throughout the album, this is another fantastic collection and proof that Tool certainly have not yet lost their edge.

Mozilla have announced the winner of the Firefox Flicks campaign, in which entrants were asked to direct a short clip to advertise the browser, my personal favourite being This Is Hot. In a similar vein the BBC have launched a new project, looking for people to submit redesigned versions of their front page, including new ideas for new interactive media features for the next incarnation of the site. Opinion is divided as to whether this marks a bold consumer-centric approach or a way to buy a million pound facelift for the cost of a measly laptop prize. Head over to reboot:bbc.co.uk for more details.

This Glass Is Now Half-Empty