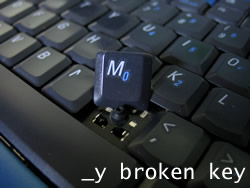 My laptop now sports only 25 letters, the M key apparently deciding that being attached to the rest was too “mainstream”. Ironically the breakage happened while I was actually legitimately working. Sliding a folder, it must have caught the underneath of the key and tore it right off, snapping one of its plastic legs in the process. Luke informs me that at least it’s only the 14th most commonly used letter, although was somewhat more helpful in providing an alternate keyboard for me to use for the moment, along with an interesting USB-to-PS/2 gizmo. In related news, a new version of Das Keyboard is out, looking identical but now boasting quality keys that will rival the best on the market. Its sleek, unmarked keys certainly bring a whole new meaning to the word minimalism.

Internet fraud is a nasty thing, and while my eBay experiences have been mostly smooth (hassle-free refunds for a few misrepresented items), the same cannot be said for everyone. A unique method of revenge followed the alleged sale of a defective laptop by Amir. The unwitting buyer claims his requests for refunds were refused so he proceeded to extract the contents of the machine’s hard drive and has produced a website, written in the first person, describing the sale of the laptop. Let us say it features material of a delicate nature. While the authenticity of his claims cannot be verified, the hilarious results have been featured in several newspapers already.

Meanwhile in Louisiana the horrendous Jack Thompson-penned game bill has received approval from the Senate Judiciary Committee and will go forward for debate. Few gamers would suggest that violent videogames ought to be played by young children but applying the same standards to seven and seventeen-year-olds is absurd. Having discussed it with Stephen (as both a parent and a lawyer practicing out there), we concluded the bill will have little effect on those it aims to protect as their games are purchased either online or by uninformed parents who seemingly refuse to inform themselves. It is, he argues, a First Amendment violation. Until those parents learn to say “no” to their whining brats, I don’t foresee an immediate solution.

Extracts from Tylion’s Journal I