This Glass Is Now Half-Empty

First up, Mitch Hedberg has some wise words about the Nintendo Wii. I also couldn’t wait to see what Penny Arcade’s take on this new slice of Japanese marketing perplexity would be. Would they take the high ground? Of course not. 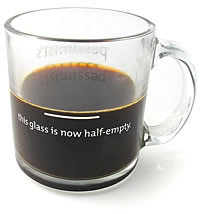 I am now the proud owner of a Despair, Inc. Pessimist’s Mug which I have been eyeing up for some time. Once I again I managed to ruin another of Kirsten’s cunningly concealed surprises by callously failing to remind her that she’d left the box of the gift I didn’t know I was receiving in plain sight in her room. Firebox’s glaring orange logo isn’t what one might call subtle. It was to celebrate our 6-month anniversary this weekend, which actually feels a little weird — these six months with her have really flown by but I couldn’t be happier. Except that it means we’re now in exam term instead of October.

The mug was a talking point when I met the two American exchange students from Yale and Brown who have been living downstairs in M. We ended up chatting over a brunch of scrambled eggs that they made me in return for having used my plates and cutlery for some time. In a feat of gross incredulity, it emerged that I knew Leah’s ex, Rawen, with whom I have been working extensively on The Globalist! I knew the world was small but I warn you that it appears to be shrinking fast.

I have come to find those “your order has now been dispatched” emails from online retailers seem to have a taunting tone to them. They serve only to let you know that somewhere in the country your chosen item exists and is writhing helplessly within its brown packaging, but you can’t have it. I cannot help picturing a retail manager somewhere laughing at me as his drooling hunchback minion sends the mocking message. Ravi suggests I may be overthinking the situation.