To celebrate the fact that I finally got round to becoming a proper Slashdot member, I thought I’d share a few of the more universal (read: less geeky technophile) gems they’ve thrown up recently.

First off is How It Should Have Ended, a great little site that got slashdotted a few days ago but quickly recovered and was very appreciative for all the attention (and downloads – 43,000 in just one day!) it received. They produce amusing animated shorts that rewrite the endings to popular films that suffered from hideously flawed closings sequences. I was particularly impressed with the Star Wars and The Matrix Revolutions efforts, since they ran along similar lines to post-film discussions I’ve had with friends. 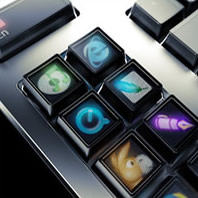 On the gadgety side is this awesome Optimus keyboard where each key dynamically changes to show exactly what it is controlling at any given time. Take a look because, although expensive to produce now, it’s undoubtedly the way of the future. And it just looks so cool!

Meanwhile, for anyone who thought that the modern videogames industry has sunk to an uninspired quagmire of violently unoriginal first-person shooters and online roleplaying, check out the bizarrely unique We Love Katamari from namco, sequel to their 2004 sleeper hit Katamari Damacy (okay, so it’s totally unique, it’s a sequel).

And when it comes to people taking things waaay too far, how about these guys who developed a system for a real life Tron. At least it keeps you fit, I suppose. Speaking of which Irina reminded me that I probably need to be doing a little more exercise if I plan on being able to lift Karleigh when I finally get to see her again. So fitness suggestions on a postcard to the usual address…