First a big plug for The Savage Jazz, Rich Homer’s band based in Guildford. Upon listening their eclectic tastes and varied backgrounds in music are immediately clear — it’s not jazz, but a rather funky sound emerging from the same mindset while musically drawing together rock, reggae and blues. Coming up is a major gig at the Rock Garden in Covent Garden this Sunday at the Platform event (2:30 – 7pm, £4 entry). For a stupidly cheap entry price and cheap booze all afternoon it sounds like a perfect pre-uni weekend. At the very least check out their site, particularly the great video for Mockingbird.

Daniel Craig had a fairly negative reception from Bond fans who, to be fair, were unlikely to accept any replacement to Brosnan’s flawless delivery of the character as Fleming wrote him. Being a fan of Layer Cake and more recently Munich, I have been vocally pro-Craig and I think the full Casino Royale trailer shows he has the gravitas and the subtle charm to pull it off. It’s different, it’s darker, and it looks damn good.

Our final installment of the popular Sausagewatch was delayed by the fact Kirsten kept a vital part in Germany. However, she was kind enough to post it over so we can proudly present the first ever illustrated edition. So without further ado… 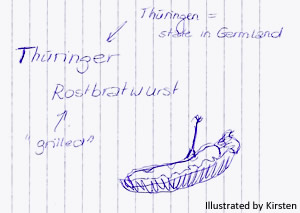 Sausagewatch: Thūringer Rostbratwurst is a regional variety of the famous Bratwurst sausage. Named after a state in Germany, the “rost” in its name denotes that it is grilled. Commonly served as a heavy snack with ketchup and/or mustard accomanied by a toasted slice of bread. I should perhaps point out that the drawing was Kirsten’s sketch on a train in Berlin and was not intended for public consumption. I, however, feel its rough artistic brusqueness rounds off our segment on German sausages perfectly.