We’ve got the booklet for the Ball off to the printers now. It weighs in at 24 pages, including the cover. Although meticulously laid out, with a map that looks deceptively clear and simple, a lot of the work had to be done in a very short space of time once our ents and sponsors were finalised and we knew precisely what food and drinks would be going where. Such things are in flux right up until the contracts are signed which tends to be closer to the day than you might imagine. However, it now looks gorgeous and Sannam at Digital Imaging is putting together a full proof, while their lithograph has already started producing covers. 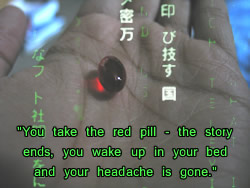 The cost was a couple of nights without sleep which resulted in a pounding headache and left my immune system pretty well shot so I’ve been ill for the past few days. It also meant I ended up taking my Annual Painkillers early this year: Kirsten brought me a pack of these wicked cool Nurofen liquid capsules. Seriously, if all painkillers looked this funky, maybe I’d take them more often. Now they just need a blue variety and we’d have a whole Matrix thing going on here too. The marketing practically writes itself.

I’ve heard a lot about the dolby technology that produces a 3-D surround effect with just two speakers, but I was truly astounded by this demonstration of 5.1 surround sound with headphones, simply by manipulating the way our brain interprets the sounds we hear. It’s by far the clearest demonstration of the effect that I have come across. Of course for full effect it requires that the two sound sources are pressed right up against your ears, so with the standard speakers the effect is significantly diminished.