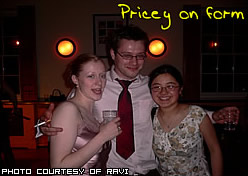 Last night the Chaplain took a few of us lawyers to Formal Hall (he takes the whole first year in small groups over the year). The food was pretty under par but hey, it was free. More importantly, since it was second year lawyer Ally’s birthday, she had a large contingent at Formal and everyone headed over to the bar afterwards. Despite having a healthy distaste for the often overcrowded bar, it was a really fun night, especially as I knew the full backstory to a lot of the typically convoluted student consanguinuities. The Tribe turned up later, as drunken and rowdy as ever, with a few individuals managing to cause some particularly amusing friction. I’d actually forgotten how easily I can slide in amongst the second years and some of them know me a lot better than I realised when they started introducing me to other people. It’s been particularly nice getting know Irina (Ravi’s college dad’s girlfriend) this term, given that I’ve barely spoken to her before but we get on really well – though I think it would be remarkably difficult not to get on with her. She is without a doubt the sweetest Ukrainian boatie I know. 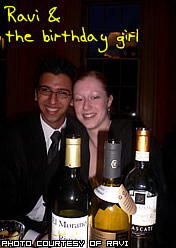 And later it dawned on me that actually they’re my year. I was supposed to have been here a year already. That was the plan. My plan. I wonder how differently things would have run if it had gone my way, sans gap year. Don’t get me wrong, I thoroughly enjoyed myself both working and in the States, but things here would be very different. Work has been really hard to settle into again and is only starting to come together now. And I would never have met some people here, which is a strange thought. I wonder which of the second years would have been my crowd. I can sort of guess, but it’s strange to think just how close we might have been under different circumstances and how certain other things may never have happened. What makes it weird is that this isn’t a random hypothetical, this was my plan that got derailed, or least postponed.

In other news, I’ve published the Marriage Formal photos from last term through The Griffin Online. I was official photographer for the night which is why there are so many. Since I didn’t post regarding it, at least you can look over the photos and see for yourself. The ones of my darling wife Charlotte and me are about halfway down (and to quell your curiosity, no we’re not going out; she was actually dating Lewis, a second year whom I met here about two and a half years ago on an open day before either of us had places!). I’m not really keen in going into detail about the night but suffice to say that, in keeping with tradition, it was fairly eventful.

And for Star Wars fans itching for something to do till May, I’ve just come across Darth Vader’s blog, The Darth Side: Memoirs of a Monster. Be sure to read through the comments which are often as funny as the content itself.