Here’s the post I’d written before the weekend. I don’t feel much like writing at the moment so it’s just presented as it was: 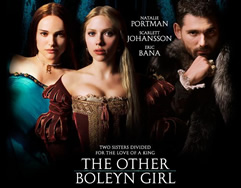 Kirsten raved about The Other Boleyn Girl when she read the book, so on noticing a film adaptation in production I grabbed a trailer and took a look. Natalie Portman and Scarlett Johansson certainly make a film easy to sit through, so I had no complaints. Thus we found ourselves in the Odeon, Leicester Square, on the day it opened. The cinemas was only around half full, although it was a late afternoon screening and I would expect the evening showing to be packed. I will write a full review but the short version is that I struggle to really recommend it. I have not read the book so my view is not influenced by that, though I have a fairly thorough knowledge of the Tudor monarchs and particularly Henry VIII. This means of course that, like most, the story is not particularly fresh — we all know what must happen to Anne, even if we are not aware of her sister.

While visually arresting with unusually vibrant vivid colours for film set in this period (enhanced by the fact it was a digital projection), it lacked any emotional resonance until the end. With the story so well known it falls to the characters to hold the audience’s attention. Unfortunately most are flat and one-dimensional with little real development. Johansson as Mary Boleyn is intentionally dully meek and despite Portman’s charm as Anne, we never really feel for her either. The changes in the sister’s tumultuous relationship appear as jarring swings rather than gradual shifts making much seem forced. This all sounds overly negative which is unfair since the film did hold my attention and provided an interesting distraction. Nonetheless it provides little new insight and is swiftly forgettable, unfortunate since the book is, by all accounts, rather good.

I thought the American TSA had gone too far when they broke open the locks, ruining my luggage, a couple of years ago and left a friendly note explaining that they took no responsibility for any damage caused. But endangering a child’s life by contaminating medical equipment is just ridiculous. Are they to continue unchecked until they actually do kill someone?