The Man Who Was Thursday 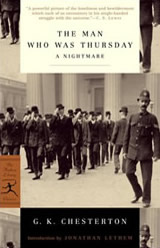 I was supposed to be going along to a talk in London yesterday but what with the “incident” had to scrap those plans (although I was still up for going: my attitude is very much, “they’re my trains and I’ll bloody well use them if I want!”) and ended up at Curry Night which was actually pretty good as fallback plans go. Fleur and Ray are becoming regulars which swells the company nicely, although Chop was AWOL (well, without our leave) in Italy.

Earlier in the day Rawen, our contact at The Yale Globalist, let me know that he’d been in touch with the Peking University chapter in China and asked me to do some web work for them, adding yet another timezone to my hefty list. Fortunately they didn’t need a full site, just contact details and an editorial list. However, I’m just hoping that no one notices where I took the photograph that was used when I designed their banner…

Lyds’ birthday party is tomorrow but has been struck repeated blows with both Cat and Dave unable to attend. I’m sure it will still be great fun albeit somewhat depleted by the absenses, especially with Rav also pulling out after yesterday’s events since he would be travelling down by train from Birmingham. Strangely my observation that it was quite safe since statistically trains only explode on Thursdays didn’t seem to placate him.

Actually after further discussion with my dad, he regards this statistical anomaly of two to be significant and suggests we send a copy of G.K. Chesterton’s The Man Who Was Thursday, which I’d just lent him to read, along to Scotland Yard as an anonymous tip-off, implicating Mr. Chesterton as the reprehensibly twisted mastermind.

Finally, for anyone who’s been following the recent Rockstar Hot Coffee controversy over the latest Grand Theft Auto game, Maddox has decided to offer his usual brand of amusingly inflamatory yet insightfully opinionated writing in the succinctly titled, “I just wanted a videogame, not eternal damnation in hell.”