I always liked Return of the King but to be honest I never really understood why it was the one to gather up all the awards. Of the trilogy I saw Fellowship as being the visually incredible one with the breathtaking landscapes and scenic shots, while The Two Towers was the fantastic action-heavy accompaniment with the phenomenally lifelike creation of Andy Serkis’ Gollum. Watching it again however, I now understand the overall appeal of Return much better. It just has so many of those breathtaking moments, with the awesome lighting of the beacons, two of the most stirring cavalry charges ever, the beautiful (if strategically ill-designed) vertical city of Minas Tirith, and of course Legolas taking on an Oliphant in The Most Ridiculous Stunt Of All Time, Part III. And yet I still feel the whole trilogy was let down by its ending which is so unnecessarily self-indulgent. I’m pleased they chose not to end on a Hollywood post-battle high and yet they ignore the books’ own epilogue (many fans were disappointed to find no Scourging of the Shire in the extended edition) with the film seeming to run through about five different possible endings before ultimately reaching its conclusion. And here’s mine: there’s only so long that slow motion shots of hugging hobbits will hold my attention.

My previous post, I swiftly realised, was somewhat premature. I knew there would be some editing left after the “final” version was distributed but I wasn’t expecting the floods that arrived. Why is it that editors seem entirely unable to spot mistakes when, say, editing, until the entire article has been meticulously laid out already? Eventually, several marathon rounds of editing and image fixing due to last minute printing changes, at 6am I managed to get the whole file, now a massive 86MB (which makes me wonder about those “eNLaRGe yOUR PdF” emails – why on Earth would I want to make it larger?), off to our publisher to pass on the printers. It’s out of my hands and I’m officially done. In fact I’m under strict instructions from Steph not even to think about ___ _________ for at least a week. So now that my work is done and the time of printing has arrived, I suppose I shall go into the west and diminish or some such. 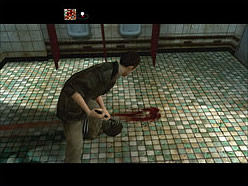 Toby was rather incensed that Tycho over at Penny Arcade stole his thunder by announcing to the world the existence of a game that Toby discovered several weeks ago, the knowledge of which he imparted to me in great secrecy. I shall not make the same mistake and therefore give him full credit for the discovery of Quantic Dream’s Fahrenheit (or Indigo Prophecy if you’re outside Europe). Rather than merely coming up with a game engine that requires a plutonium powered computer, degree-level physics, or just a very big gun, they’ve taken the bizarre step of producing a genuinely new concept. You essentially play director in this occult murder mystery, controlling the key characters as the story unfolds and playing out each “scene” in different ways, taking care to keep their mental state under control. Brilliant use of split screen lets you see what’s going on elsewhere, placing much importance on timing.