“The King Has Returned” 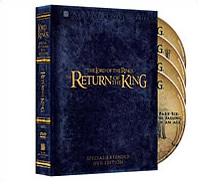 As an old baboon friend of mine said, although he was talking about a lion and I’m talking about an event for which I have been waiting two and a half years. Yes, I am finally holding in my hands the 12-disc extended DVD trilogy box set of Peter Jackson’s epic Lord of the Rings masterpiece.

So, worth the wait? Well, having been delayed from its intended November release, we are treated to 48 minutes of new and extended scenes bringing the feature running time to about 4 hours, with the total extended trilogy now clocking in at 654 minutes, nearly eleven hours in Middle Earth. Although there is more new footage here than in either of the previous films, it alters the dynamic far less. In the first two movies, large chunks of character development had been cut from the theatrical release to ensure it flowed smoothly. By the third film, the character arcs are pretty much complete, with exception of Frodo and Gollum. As a result, most welcome are the new scenes in Mordor, the interior of which we barely glimpsed in the theatrical cut.

The majority of the totally new additions are merely the inclusion of key scenes that Tolkien fans have been waiting to see, such as Saruman’s final words with Gandalf and grizzly end, the confrontation between Gandalf and the Witch King, and the Mouth of Sauron. We also learn a great deal more about Faramir and Denethor, who becomes a much more engaging character as a result, and their relationship. Eowyn and Merry are granted more screentime which deepens their roles too. You will likely be disappointed to hear that the ending remains unaltered, and there is no Scourging of the Shire addition for which many fans had hoped. One interesting alteration is that after the Paths of the Dead sequence, extended with creepy Indiana Jones style traps, we see Aragorn and co. take on the mercenary ships (including a Peter Jackson cameo that was cut from the theatrical version) since the director assumes their later “surprise” entry to the battle has already been witnessed by the viewer.

This is without doubt the most impressive DVD box set I have seen yet, in both content (with its incredibly comprehensive behind the scenes footage and stills running across 6 additional discs) and presentation (each film’s box is beautifully presented with original artwork and design sketches). An absolute must have for anyone who does not yet own the extended versions of this, the ultimate in epic fantasy.

The Ambilight of the World