To illustrate the profound stupidity of this movie, I would like to share with you how Will discovers Sandy is sleeping with Tweed. He spots them through the key hole in her dressing room door. If anyone has seen a key hole in any door constructed in the last 25 years (and that’s pretty generous), please email me. Remember, this is a major Hollywood studio. Are you freaking kidding me?

How It Should Have Ended is a site I’ve mentioned a few times for their imaginative animations reworking the endings of popular films. Soon after they started, their Star Wars ending resulted in a slashdotting but earned them a large fanbase. Recently I noticed they have also been writing short movie reviews, and encapsulated within these is a specific review of the film’s ending. Largely a gimmick, but an interestingly different take (since the ending can often make or break a movie), these reviews are obviously rife with spoilers so are perhaps best read after watching the film for yourself. 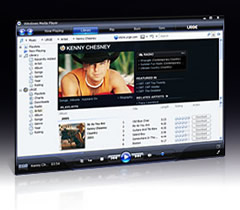 A beta release of Windows Media Player 11 was leaked several days ago and officially released on Wednesday. Aside from a pretty update to the GUI (I personally prefer the look of the XP build to its transparent Vista counterpart) it features a new library system and an iTunes-esque set of large controls at the bottom. Musicmatch Jukebox remains vastly superior to both in terms of a music library, but WMP has the inclusion of video library management, although a tagging system of some sort would be appreciated. Unfortunately constant crashing means I’ve had to rollback to the previous version again and therefore cannot wholeheartedly recommend trying it out for yourself due to the instability of the beta. Microsoft have also released the hardware requirements for running the next iteration of their operating system and I find there is something disconcerting when their recommended specs require my machine’s full power in some areas (a gig of RAM and a 128MB graphics card, no doubt to power Aero’s transparent visuals). 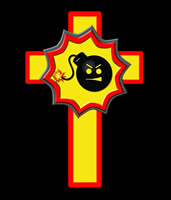 Finally, we had a Chapel Warden’s Meeting and in the course of events the topic of religious sabotage arose. That is to say, Rachel decided that we would be remiss in our Christian obligations if we failed to superglue the locks of the library doors to prevent people working on Sundays. Consider it guerilla religious warfare against Tripos. Faith or no, I think it’s a great idea and Davy agreed for, I would surmise, similarly convivial and thrill-seeking reasons. As such it seemed pertinent to produce a logo for our new society, dubbed “The Sabbathteurs”. I think at least Sparkie will glean the reference and approve.

Best and Worst Tickets in the House