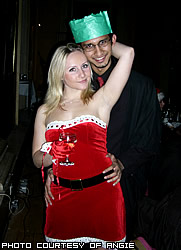 I’d like to raise a glass to every member of The Christmas Leprechaun Appeciation Society who voted that we dine on Wednesday. Due to circumstances utterly beyond College’s control, the first night of Christmas Formal that had been scheduled for Tuesday was cancelled at the last minute due to a gas leak. We, on the other hand, had chosen well. Replete in the ever-fashionable amalgamation formal attire, gowns and obligatory santa hats, the Hall teemed with students intent on achieving a suitable level of inebriated festive cheer. Charlotte was looking particularly alluring, having ditched the traditional wear entirely in favour of a very festive, very short outfit that was very reminscent of Michelle Monaghan in Kiss Kiss Bang Bang. I’m not allowed to tell you where she got it from.

On Thursday the careers service held a Law Fair at the University Centre which was filled with firms vying for our favour and, therefore, assualting us with their respective goody bags before we could be tempted away by some other firm’s alluring soul-sucking branded merchandise. Staggering back with several bags brimming with brochures and application forms (my reasons for attending weren’t purely mercenary), I dumped them in my room and surveyed the afternoon’s takings. Although I’m now openly biased, Linklaters came out on top in first impressions. Leona (who was at the dinner a few weeks back) stuffed the bag nicely, including a Linklaters lip balm for Kirsten since I figured she’d detest the very idea of it being branded by lawyers. Turns out I was right. After commenting off-hand that the Post-it indexing tabs were very useful for statute books, Allen & Overy proceeded to give me four packets along with a stressball (something tells me unfortunately the latter will be the more useful). 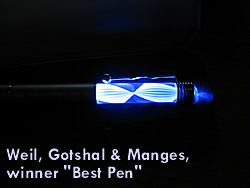 Having had time to closely inspect the bounty, here’s the run-down and specific category awards. The award for “Best Pen” goes to Weil, Gotshal & Manges for a kaleidoscopic glowing device that I cannot take to lectures else I’ll be too distracted by the pretty lights. And yet it manages to remain sophisticated despite the fact it occassionally glows pink. The runners up were Skadden for an incredibly useful pen that incorporates both a highlighter and a dispenser for the aforementioned Post-it index tabs. Unfortunately it’s a hideous bright yellow. I’m sure Yvonne would have loved it. The “Classiest Standard Pen” category is open to those pens sans gimmick, letting their style speak for itself. Freshfields plucked this category with a gorgeous, heavy black and silver number. “Best Gadget” was interestingly fought. Travers Smith would have taken it with their auto-opening calendar/calculater if only I hadn’t gotten exactly the same device from someone else at a Fresher’s fair last year. Nevertheless it was useful since the battery on the old one has just run out, so now I have a nice shiny new one to replace it. SJ Berwin came out on top with a device that wasn’t just cool, but genuinely useful, providing a universal phone charger with a set of adapters to fit any mobile phone currently on the market. Not a bad haul for an hour’s work…

Finally, if anyone remembers thrusting a Santa hat on my head in bar on Wednesday, no doubt with the sole intention of crushing my hair, then let me know because I’m quite certain I didn’t buy the one that ended up in my room. Unfortunately Kirsten stole it before she left so I can’t return it. Just send me the bill.

In The Mood For Wong Kar Wai