The Ambilight of the World 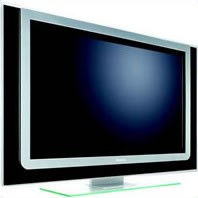 Well, the swanky new Philips 32″ flatpanel TV arrived on Saturday, and after a few days of intensive “testing”, I’m ready with my verdict: O.M.G., this is so cool!

Okay, well firstly I should point at that for some reason this isn’t the usual sort of purchase my family would make, and is in fact an early Christmas gift to my mother from Philips. But either way, it’s sitting in my living room and it’s mine. Well, hers. So what’s so special about the 32PF9986, which definitely deserves a cooler nickname? In fact, I think I’m going to refer to it as the Philips Ultraglow for the remainder of this review. So, the Ultraglow has the standard range of features one would expect from a high-end flatpanel, but aside from its startlingly crisp visual display, also comes packed with a few special ones too.

The standout feature that pushes this way ahead of the game, however, is Ambilight. It has to be experienced to be properly appreciated but here’s the basic principle. When watching a normal TV in a dark room, the intense bright light being fired towards your eyes, coupled with the flickering glow from your peripheral vision strains your eye as it tries to focus on the artificial image, moreso with extended use which can eventually lead to headache. Ambilight counteracts this beautifully by emitting light from the back of the TV. This backlight which gives a soft glow to the room (the TV must be position against a wall for this to function correctly) gradually varies in colour and intensity based upon the current image on the screen. So as your visual image changes, so does the light level in the room. Ergo no eye strain. Pixel Plus 2 is the next level of Philips’ video processing technology, enhancing image quality even further than its predecessor. Most important is its sharpness and resolution enhancement by scaling any incoming signal to the maximum resolution of 2,560,000 pixels, then altering each pixel to match the surrounding pixels. It also includes digital noise reduction to remove smearing, dynamic contrast that darkens areas proportionally, and digital natural motion that compensates for motion blurring.

This is a gamer’s delight, and could have been made for Halo 2. Co-operative play looks fantastic on this much larger screen, and while ambilight can sometimes struggle to keep up with its swift pace, it capably reflects your changing surroundings. And all 32″ of it should allow for some serious 4-way multiplayer action too!

For those attepting to run Halo 2 on a widescreen, I would recommend leaving your Xbox output setting as 4:3 rather than widescreen and allowing the TV to resize it, else you will find the console will split the screen vertically rather than horizontally in co-operative play.

“The King Has Returned”