Teh Master of teh Thing 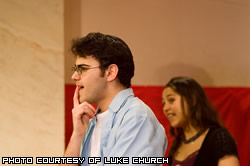 I had been hoping to see The Master of the Thing earlier so that I could recommend it’s conjectured brilliance. Unfortunately I have to place my faith in your foresight and good taste to have led you there regardless, as I was only able to see the final performance on Thursday. It was a fine performance indeed, and seeing it later in the cycle meant I was also able to see my son Anton in action, having recovered from his earlier illness. The photos decorating this entry are Luke’s, since the programme divulged his official role as taking “lots of pretty pictures” (considerably over 3 gigabytes, I am informed), so it seemed appropriate. The cast were impressive but the night was certainly Shamini’s — she wrote, composed, lyricised, acted and directed. Not bad for a NatSci! 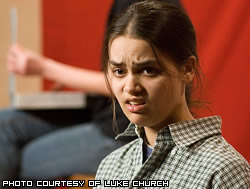 The immediate feel was very similar to last year’s freshers panto which I co-wrote. Although set once more in Downing’s hallowed grounds and with humour and pop culture references in the same vein, this was a more tightly scripted story and, of course, a musical. Most people know I’m not overly fond of musicals per se, but I do feel they lend themselves well to comedies, such as last year’s Apocalypse: The Musical, by reinforcing the light-hearted, almost frivolous theme. The musical numbers were startlingly impressive (not that we expect anything less of Shamini naturally, merely that they were particularly accomplished for an in-college production), but their real forte lay in their lyrical wit. Perhaps moreso than the convoluted plot involving an alien Master, a vortex-swallowed P’lodge, and a rag-tag bag of minority subject students (yes, Kirsten, CompScis are a minority subject). A great show, and bodes well for DDS in future. Perhaps Ollie said it best when he explained, “this play is Shamini”. 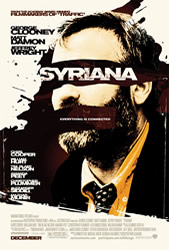 Yesterday a bunch of us headed for one last Picturehouse outing before the holidays to see Syriana. Wow. Admittedly bleak and undoubtedly (unshamedly?) the most cynical world view you’ll see on cinema this year, it’s utterly compelling. I’ll avoid ruining the story since I expect you all to see this film, but suffice to say it focuses on American oil policy in the fictional Middle Eastern state of Syriana. My respect for Clooney rose after seeing Good Night, And Good Luck but skyrocketed at his ability simply to make this film happen. For such an overt attack to arrive with Hollywood stars and be distributed so widely is unprecedented in the current climate. The film makes Michael Moore’s theories seem like Disney song ‘n’ dance numbers and yet despite its fictional façade, there is an undeniably chilling feeling of truth lingering behind it all.