One of the few minor perks gifted to users of the rather overpriced “Ultimate” flavour of Vista was that of animated wallpapers called “dreams”. Although not an entirely novel concept, it was impressive in its low use of system resources since it made use of the fact the OS now has direct access to the computer’s graphics card. Now this is available to all Vista users* through Stardock’s DeskScapes. This is no cheap knock-off or mimicry either — Stardock are the people who developed the .DREAM format in the first place. Presumably their exclusivity period to Vista Ultimate has now expired. 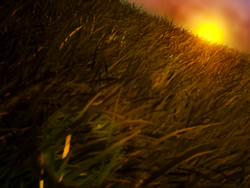 DeskScapes is a fairly small application that integrates fully so that you can pick animated wallpapers through the usual wallpaper selection interface. The model appears to be that the free version will only allow specific bundled dreams while the paid version (around $20) will support scores of fantastic user-created downloads. The current preview release contains just 3, only one of which is worth using but it alone sells the concept with a beautiful sunset scene — imagine those blades of grass billowing gently in the breeze with the light playing realistically off the surface. Presumably the final version due later this month will include several more. The standalone price is low but I imagine most won’t be willing to pay for such a focused application. However it will also form part of the Object Desktop package that allows complete customisation of virtually every element of the Windows interface.

Speaking of Stardock, one of their developers wrote an interesting article in response to the recent discussion about the state of PC gaming and the effect of piracy. Many major developers and publishers decry piracy as being the chief architect of the downfall of PC game development but Stardock, who deliberately distribute games without any form of DRM, argue otherwise, showing strong sales despite the ease with which the game could be copied. The suggestion is that if you treat your paying customers well, they will reward you. The pirates, meanwhile, should simply be ignored in all business decisions as falling outside the market.

* There appear to be limitations under Vista Basic since it cannot run Aero.