Humans and our ancestors have been using tools for some two and a half million years.  Over that time I think we have earned the right to be picky not just about their utility, but just how they sit in our hands.  Certainly, I have always been abnormally selective in the cutlery I feel comfortable using (at home anyway, I can generally suppress it when outside): it must be slender, smoothly curved with a balanced weight distribution.  The reason, it eventually dawned on me, is that subconsciously I see cutlery as an extension of my fingers, giving rise to certain preconceptions about how it should feel and respond.  It also explains my affinity for chopsticks which are essentially a direct extension of two fingers.

It should come as no surprise, then, that I am similarly specific about my mice, being tools many of us spend hours each day using both at work and home. I recently described purchasing a new mouse as like acquiring a new limb, an idea which seemed to resonate with several people. A good mouse is a perfect example of how, when form follows functional ergonomics, a thing of beauty is created. I currently use three mice, with different choices behind each one.

The bedroom: my desktop is primarily a gaming machine and unsurprisingly sports a gaming mouse, a Razer DeathAdder. Razer understands that while there are technological requirements consistent across all gaming mice (high resolution sensor, fast response time), an individual’s mouse grip affects ergonomic considerations, as they distinguish between the most common palm grip, the claw grip and the fingertip grip. My gaming style is a claw grip which I find lends itself to swifter reactions. The result is that I wanted a mouse with an arched body for support and lipped edges to it buttons to avoid my fingers sliding off the sides (essentially concave buttons rather than a mouse’s typical convex surface). Unlike my other mice, this one is still wired to avoid the risk of running out of charge mid-game.

The Office: Conversely, at work I adopt a palm grip for comfort over long periods. When replacing my work mouse recently, I briefly considered one of the new wave of multitouch mice with the neat swiping gestures they bring. However it became clear that far too many ergonomic compromises have been made in all the touch mice on the market. Instead a large “handshake” mouse would maximise comfort and the Logitech MX Performance is the easy choice.  Its perfectly constructed sweeping body both feels and looks fantastic, while its freely spinning scroll wheel is a life-saver when dealing with long documents – a single flick of the wheel sends pages flying past. Despite its size, the mouse is surprisingly lightweight, requiring minimal effort to use for long stretches. Sold as rechargeable, opening it up reveals it actually runs off an AA battery, shipping with an eneloop (Sanyo’s new rechargeable range with a greatly reduced self-discharge rate, with which I have replaced all my AA batteries).

The Living Room: While my HTPC is primarily controlled with the same universal remote as the television to which it is connected, it runs Windows 7 and is capable of other functions that necessitate using a mouse from the sofa.  The Logitech MX Air is ideal as, in addition to functioning as a normal mouse when on a flat surface, it is gyroscopic so can also be picked up and used in the air.  Rather than waving it around in an exhausting manner, it is best used by simply angling it in the appropriate direction with a small movement of the wrist. Given that it is held more like a remote than a typical mouse, its weight distribution is crucial, sitting comfortably in a rounded ball that fits the palm of your hand with just the slender buttons at the front. 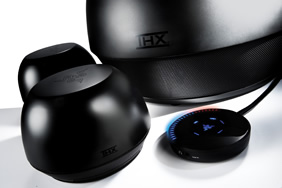