Aurea: There Is Only One Sun 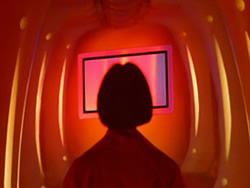 I am aware that, when I posted a link to the Philips Aurea mini-site before, it was down for maintenance. It’s now up again so you can all bask in its truly beautiful glow. Only unveiled recently, I had chance to see one in person at John Lewis recently and it really is stunning. When it’s on, at least. Unfortunately for the light effects to filter through the front of the panel (rather than side/rear projection with their earlier Ambilight screens) it has to be white. So when it’s switched off you have a gigantic glossy white monstrosity sat in your living room. If your life is Apple-styled then it’s probably not an issue, but if you have taste then it may be difficult to fit comfortably into your living room.

Such foibles aside (why would you leave such a gorgeous device off after all?) the link is worth checking out just to see There Is Only One Sun, the stunning film directed by Wong Kar Wei as a demonstration. Make sure to click the link for the entire film (around eight minutes) rather than the shorter version. Part film, part study in light and colour, it’s easily as good as any of the recent Bravia ads minus the gimmick. It’s light on content, of course, but oh so pretty. Apparently these days TV ads for TVs are where it’s at.

The first day of a new month seemed like an appropriate time for a return to active duty. The flat is now really taking shape with just a few major additions left — the rest will be purely cosmetic. The living room is everything I had hoped with the Sony Bravia KDL-40W2000 taking centre stage. I have been stalking that screen from a distance for over a year, and it was with no small sense of accomplishment that I finally switched it on. The delivery man enviously described these screens as looking “like water” and he’s not wrong. This level of stunning television construction is approaching an affordable price at last (although the truly extravagant can still easily drop three grand on the new Philips Aurea — you know a launch is special when it requires Wong Kar Wei direct a short film). The only downside is that while the Xbox plays divinely and upscales DVDs with aplomb, it has proved stubbornly unwilling to communicate with wirelessly connected PC. Trailing a dozen metres of ethernet cabling between rooms is not really a solution so this needs to be investigated further.

You have probably gathered that we now have internet access from the flat, which also makes work decidedly easier since BPP conveniently make most of their resources available externally. Thus I can continue to keep unsociable student hours rather than restricting my work to the hours that librarians keep (the hours they are paid to keep at any rate). It’s no secret that I am a technophile but, while I wouldn’t characterise myself as dependant, I admit I was surprised by just how comfortable I instantly felt once the dual combination or the internet and TV were sorted out. In honesty I barely watched broadcast TV in the past few years, but I still needed my DVD and Xbox fix, particularly with the release of Halo 3. Yes, I have been playing it avidly, but I feel it probably deserves its own post shortly.

Given my absence there are obviously all manner of things I could ramble on about at length but I’d like to keep posts a bit more focused in order to ensure you retain a steady stream rather than the occasional deluge. Rest assured that regular service has now been resumed.