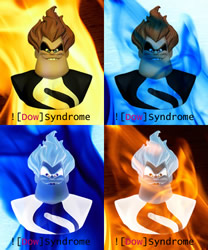 My new hard drive, now named Syndrome, arrived last week and having had a little time to play with it I’m very impressed. At around 3GB to the pound, the bargain iomega drive was a snap to set up and looks exceedingly sleek (sleek enough to name at any rate). Slimmer and longer than I was expecting, it doesn’t take up too much deskspace and is surprisingly quiet, emitting no more than a soft hum, easily drowned out by your PC’s internal fan.

Beyond the novelty of seeing 5% used as opposed to the 95% to which I had become accustomed, having the extra 300GB allows for a little more experimentation with video encoding (I highly recommend Doom9 if you’re interested in that sort of thing) and a lot more photographs in higher quality formats. The bundled software also takes care of instantaneous backups of important files, letting me relax a little when it comes to those vital Ball and Globalist documents. Speaking of which, the third issue of the Globalist is now taking shape with Dexter helming production. Although labelled March, I’m as yet unsure of the final release schedule: it may appear early next term instead. Due to some delays at Yale, the previous issue has yet to appear on the website but I’ll let you know when it does. I think it improved in leaps and bounds over the first issue so I’m really proud of the result.

A bunch of us finally got together in Lyds’ room to watch Seven Years in Tibet as I had been intending. Afterwards, spotting Tremors sitting on her shelf, my eyes lit up at the prospect of B-movie fun with Kevin Bacon, so I’ll have to return to that gem soon.

Looking through the site’s stats I stumbled upon my photo of sleeping Pepper (Jenna’s kitten) being used online. I also recently discovered another good way to toy with telemarketers.