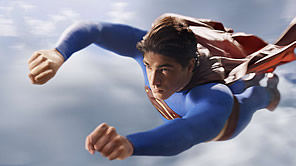 For the most part I agree with Scott Kurtz’s “review”. You leave the cinema truly believing that it’s possible for a person to fly. Again. The first action piece as Superman rescues a plane hurtling to the ground remains the film’s highlight, despite the larger scale of the finale. A welcome return it certainly is, and the effort etched on his face makes it a very powerful cinematic moment. As this Multiplex comic shows, however, discussing the film’s faults becomes somewhat problematic without divulging major spoilers. As such, I shall refrain from detailed analysis. Suffice to say that they are setting up for a trilogy and, as is so often the case, the quality of the first film depends largely on the outcome of its successors. If the next film is great, this has done its job well.

Brandon Routh steps seamlessly into the Reeves’ large red boots. As Superman the continuation is perfect, a real credit to the young actor who must have spent many a night soaking up his predecessor’s performance. As Clark he takes a subtler approach, playing him as the slightly clumsy perennial nice guy but without the slapstick upon which Reeve’s performance bordered. Lois is essentially a new character, much better suited to the modern audience. Finally, Spacey’s hotly debated performance lies somewhere in between. He has morpher Lex Luthor from Gene Hackman’s eccentric villain to a darker, more bitter character. My dad wasn’t impressed by the trailer but loved the result. I am still undecided.

One’s approach to the film largely dictates one’s feelings. It is not the action extravaganza that many might reasonably have expected. Romantic subplots are par for the course when it comes to superhero movies as it offers the audience a way to relate to an otherwise inhuman character. However this is a rare occassion when the romance could be said to be the plot, with the action of lesser importance.

The Man of Steel Returns