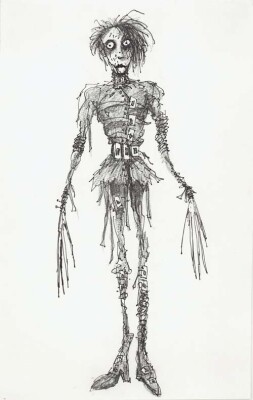 Untitled sketch by Tim Burton, 1990
Pen and ink, and pencil on paper

Two of my favourite films, released almost three decades apart, are linked by an interesting thread: touch. Edward Scissorhands’ design was rooted in this concept. Tim Burton was looking for a physical manifestation of his isolation — bladed hands that prevent him from touching others without hurting them (“Hold me.” / “I can’t.”), or even himself as the scars peppering Edward’s face attest. In Blade Runner 2049, lack of touch is a defining feature of both K and Joi for different reasons. K is a replicant (a synthentic human) who hunts down rogue replicants for the police department, simultaneously rejected by human officers as a “skinjob” and shunned by his fellow replicants as a traitor. His only real companion is the Artificial Intelligence Joi, whose holographic projection lacks physical substance. She yearns to be able to touch K, to break through his isolation, to comfort him. In one of the film’s most mesmerising scenes, Joi hires a replicant sex worker as a stand in, overlaying her projected image, in an effort to be closer to K. With nothing more than implied nudity, the scene evokes more vivid intimacy than I have seen captured on film in recent memory.

Simon Van Booy said that “For lonely people, rain is a chance to be touched”, an idea that always resonated with me. It is telling that when Joi is able to leave the confines of K’s apartment with an “emanator” upgrade, the first place she wishes to go is the roof, out in the rain. As she remains a hologram we see the water first fall through her image until she responds to it by adjusting her visual representation to make it appear that the water is splashing on her skin and settling — a facsimile of the touch she craves. This is, incidentally, why I think the lonely and depressed have a propensity to take long showers. Although in popular culture showers act as a cleansing metaphor, washing away guilt or shame, the sensation of warm water running across skin is also another chance to be touched.

Although I only came to appreciate it a few years ago, touch took on a particular significance to me as a child because of my grandmother. She lived with us and from my earliest memories she was virtually blind and had started to lose her hearing. We would spend time together sitting on the sofa and talking, with clasped hands replacing eye contact. She would recite Tamil nursery rhymes with accompanying actions — I could not understand the language, only her touch. Another game involved writing words on one another’s hands, trying to guess the letters from touch alone. Ours was a slow form of non-verbal communication, and perhaps this allowed me to be more patient with her when repeating explanations long after others had given up in exasperation. And I suspect it was touch that kept her grounded, even as her other senses failed.

The isolating nature of the absence of touch is not adequately recognised. Although we often denounce children’s communication through electronic media rather than in person, many of our real-world interactions remain staid, as if merely sharing the same general space is sufficient. What we consider to be “traditional masculinity” typically limits straight men’s access to touch to a firm handshake or a brief hug goodbye. A more intimate, lingering touch in a social context is considered inappropriate. I was fascinated by a series of vintage photographs that circulated in 2012 showing that in the late 1800s platonic intimacy was commonplace. In fact it seems to have been the sexual conservatism of the mid-1900s which drove the idea that physical intimacy between men was a sign of homosexuality and therefore to be avoided. So this is not even traditional masculinity; it is a byproduct of a more recent conservative mentality that we have already rejected.

A friendly touch lowers stress-related cortisol and increases the release of oxytocin, a neurotransmitter that promotes feelings of trust and bonding. Although its strong release from cuddling has led to it being colloquially dubbed the “love hormone”, oxytocin relates to any kind of pair bonding. Without touch and oxytocin, we are less trusting of others, and we feel less connected. Isolation and distrust are notably attributes we tend to associate with toxic forms of masculinity. This may also be a route to understanding the difficulty in adjustment experienced by those who leave a tactile brotherhood like the military.

So the importance of staying in touch with friends should be taken as literal rather than merely figurative. We need to break the social perception that conflates touch and sexuality. It is fitting that this piece was finished today, on International Men’s Day, but it is just as relevant for friendships in mixed groups, where judgments are frequently made about those who are more tactile with one another or about individuals who are more comfortable with such interaction in public. By stifling this, we are placing artificial barriers in the way of our ability to forge deeper bonds. By drawing together through touch we may find ourselves still adrift but at least less isolated.