Many years ago there were three major players in the music software arena. Microsoft’s Windows Media Player was everyone’s default starting point since it came with their machine. Unlike the decent jukeboxing offering it has evolved into, at the time it was basic and severely lacking in features. For those moving away the chief contenders were Nullsoft’s Winamp and Media Science’s Sonique. Most are familiar with the former but sadly the latter passed under most people’s radar. Where Winamp 2 was skinnable in terms of overlaying new rectangular interface images, Sonique allowed skinners the freedom to totally redesign the interface from scratch with colourful curvy designs and smoothly animated menus. Aside from looking gorgeous, its audioEnlightenment decoder was great and its visualisations looked awesome as they throbbed in time with the music. Lycos bought up Sonique, then later fired the entire team, and hired a few people to work on a new version. Aside from an unstable beta release things became very quiet and eventually the project died entirely, its website quietly disappearing in September this year.

Meanwhile Winamps attempts to copy Sonique freeform skinning resulted in the horribly bloated Winamp 3 that served as a proper jukebox but was an awful piece of software. After that I stopped paying attention to it entirely but recently discovered that the latest release, Winamp 5, is actually not bad at all. Whilst I still find Musicmatch Jukebox unsurpassed when it comes to coallating music into a library, for playing individual files I prefer a lighter application as I don’t want my entire 20GB catalogue loaded every single time. The lite version of Winamp 5 is ideal for this, loading instantly and also offering full support for Nullsoft’s SHOUTcast free internet radio. 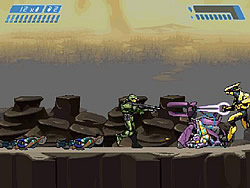 Halo fans simply have to try out Halo Zero. A free full game designed by fans, it’s a side-scrolling Halo-themed throwback to the arcade joys of the Metal Slug era. As you might imagine, the resulting gameplay both feels familiar and is highly addictive. The homage features music from the original game and elements of its GUI too. As it was developed by a French team there is unsurprisingly also a French language option which leads to an even more surreal experience. Il y a un Warthog, bitch.

Barenaked for the Holidays