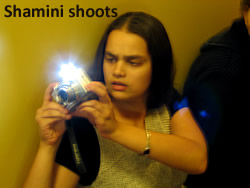 Over the weekend Sparkie and Sonya were kind enough to cook a Greek meal for the whole corridor. Beginning with bread and a fetta salad accompanied by a plethora of dips — taramasalata, humous and a homemade tzatziki — the main course was a delightfully flavoured chicken dish. Followed up with yoghurt and honey, things started to get a little more boisterous once the “traditional” Greek spirits were brought out. Shamini could, I can only imagine, be heard several staircases away. 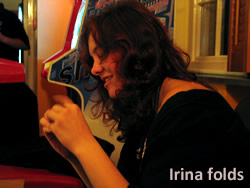 It was the first time I had been able to see Rob’s camera up close, dubbed the PredatorCam™ because of the not-very-subtle laser sights it plasters across your face before taking a picture or stealing your soul (at least I think that’s one of Sony’s scene modes…). The effect is akin to a dozen small lacerations opening up on the “victim’s” face. Shamini can be seen modelling the PredatorCam™ above. The other pictures adorning this entry are from the previous weekend’s festivities following Andy B’s birthday formal. There is something mesmerising about the thoughtful contemplation present as Dave blasts through Time Crisis. Who says games can’t be philosophical? 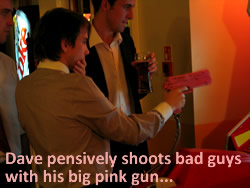 Now that wireless networking has been introduced to the Squire Law Library, I found myself trying it out on my laptop earlier today. The experience is remarkably smooth, but also presented the first time I had used my laptop for a prolonged period without connecting it to the mains. Despite being a laptop (well, notebook according to Dell, and I do appreciate the distinction) this is a very rare occurance. I make good use of its portability as it has now visited more countries than the average American, but I usually find a nice place to plug in an settle down. It normally generates a reasonable amount of heat and the fan will fire up and get a little noisy to compensate. Yet the entire time I used it this morning, the machine was barely audible was still fairly cool as I packed it up. The battery-saving techniques when not plugged in are not only impressive, they actually make it far more pleasant to use.

Searching for a Smaller E3

That Time of Year