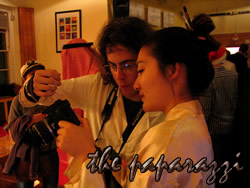 It appears that Luke has been secretly blogging. That he refers to P-2006 as an inspirational “sterling example” is a little embarassing because it creates the urge to provide a well-presented content-driven post now — surely something happened in the past week while the site remained noticably silent. For those who enjoy his intermittent, highly recognisable brand of ranting, it’s definitely worth a read and the cogent arguments receive more careful construction than the “quick” responses that I hope we shall still receive here.

A belated congratulations is due to my parents who celebrated their 25th wedding anniversary, taking a well-earned day off (from work, not each other) which they spent in London, concluding with a show of Les Mis. I imagine they will be comparing notes with Kirsten shortly, as she arranged a trip to the show as a leaving do at the end of her placement with Merrill. 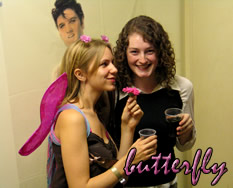 Lectures and work have now commenced fully leading to the familiar feeling best summarised in riddle format: “When is a weekend not a weekend? / When it’s in Cambridge.” Intellectual Property is certainly shaping up to be a great course and my other optional selections are Commercial and (after some confusion over whether or not they would be occuring) half papers in Medical and Media law. Coupled with the compulsory behemoths of EU and Equity it’s looking to be a full, but hopefully enjoyable, year. 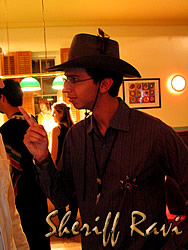 Yesterday was the first big ent of the year, marking the end of Freshers’ Week with the When I Grow Up I Want To Be… party. It seemed a bit odd given that when I grow up I want to be a lawyer which, conveniently, I already have sorted. To be (marginally) more creative I decided to tap into my criminal side going instead as The Godfather. With our “proper” cameras in tow Luke, Lufa and I made a strange trio of costumed paparazzi. I am still learning more about my PowerShot G5’s capabilities after close to three years. I have never been happy with its results in low light, but pushing it to the highest ISO level I was able to grab a few decent shots. Ideally I need to use bounce flash but I am hesitant to spend money on a camera that I am likely to replace within a year. Instead I now need to experiment with noise reduction techniques in order to clean these up before I display them all here in a new Cambridge gallery for this year. Sparkie already has a few photos on display.