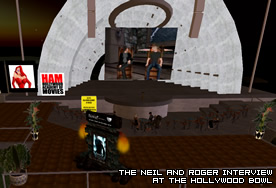 Second Life is a virtual world that falls well outside the “game” descriptor. It is better viewed as a platform for communication and expression, very much symbolising the virtues of the web itself. With a working economy, some have taken things further and the virtual real estate market has proved highly lucrative. I created a Second Life for myself a few years ago but was not particularly impressed by my first foray. Control felt clunky and unresponsive and the whole experience was plagued by lag rendering it almost unusable. When Neil Gaiman mentioned that an interview promoting Beowulf would be his first time in Second Life, it seemed like an ideal opportunity to give it another go. The whole idea is rather fitting, after all, for a film that seeks to take the concept of digital actors to a whole a new level. 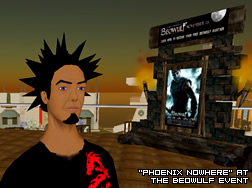 So last Thursday I hopped back in, quickly spruced up my avatar and found my way to the Hollywood Bowl where on Saturday the interview would be broadcast live (from the private Beowulf Island before a few VIP guests). Today I was able to experience one of the truest attempts at fusion of the real and virtual: a virtual interview of a real writer and director (Roger Avery) discussing their real film, broadcast to a virtual auditorium of virtual avatars being controlled real people. Confused yet? While fun, this was very much a novelty. Far from seamless, this was very much inferior to the alternative of a direct webcast interview which would have offered much better video quality without continuous drops. On the other hand, had that been the case, I probably wouldn’t have bothered to watch it.

Second Life definitely feels more impressive now than on my last visit, but there are clearly still a lot of issues to be resolved. It is perhaps unfair to judge it since the client does not yet officially support Vista, and some bugs (including crashing to the desktop on occasion) may be due to this incompatibility. Moving to a virtual art gallery, for example, the sluggishness and low visual quality seems markedly inferior to a web gallery, yet the ability to have a “live” musician playing at the event does add a certain charm. I certainly won’t become a regular user at the moment, but I have a feeling I will be frequently popping in for short trips to check things out.