With the Big Three press conferences out of the way, E3 proper unfolds and is really about the games. I’ll aim for a less specialist (though not entirely game-free) entry today.

The University of Chicago Scavenger Hunt is an annual multi-day event which is unlike any you’ve seen before, inspiring creativity and some pretty impressive feats of engineering. Amongst the items on this year’s list are a working wood refridgerator and a one-way funhouse mirror. Also on the list, and a worthy trophy regardless of the hunt, is Austria’s most oft-stolen road sign.

At last four former Guantanamo detainees have won the right to sue the US government for violating their religious beliefs. Previous attempts to do so were blocked by the government on the grounds that the conduct — which included flushing a copy of the Koran, and forcing Muslims to shave their beards — did not occur on US soil. 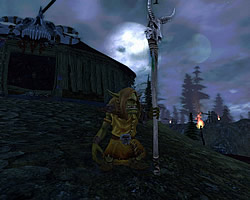 More information about Mythic’s MMO Warhammer Online is now being released at E3. Some have accused it of mimicking another popular franchise, leading to the derogatory “World of Warhammer” moniker. In fact the 25-year-old Games Workshop license from which it draws has been more than a little copied by Blizzard themselves in the Warcraft series, and was itself adapted largely from the Tolkien Middle Earth universe. Maintaining the integrity of this fantasy world is key to their vision, resulting in unique classes for each race. For example rather than the usual pet classes, Goblin Squig Herders (which insane designer Paul Barnett described as as “pet classes, just not dull“) include abilities like being eaten by their own squig, which they then wear as armour or roll around in Metroid-style. 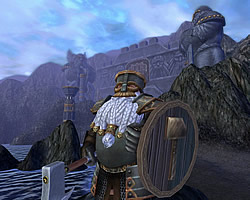 Racial identity is also key, and Paul’s familiarity with the source material (he previously worked for GW) resulted in descriptions like Dwarfs as the “northern working class” miners, and Dark Elves as “posh people what have taken a lot of drugs. Like Byron.” Despite the vibrancy of this imagery, the overall tone is darker than Blizzard’s WoW, with the pervasive continuing war being a central theme. The idea is that not only will you, say, raid and pillage the Dwarven citadel, but shave the very beards off your prisoners. Personally, having spent years of my youth battling Chyde’s Dwarf menace, I’m rather keen on seeing a beard-shaving minigame…