Sam And Rosie Tie The Knot

On Saturday the first of my school friends got married. I would be lying if I said it wasn’t weird, but then if anyone were to do it, Sam and Rosie are the obvious choice. Regulars here knew about this a year ago when they first got engaged, so I suppose I have had enough time to become comfortable with the idea. 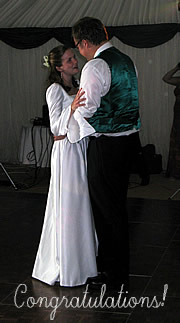 The wedding was held in Nutfield at Sam’s grandparents’ house. Their massive garden allowed for a beautiful outdoor service as well as a large dining marquee which served as a disco tent later in the evening, once tables had been pushed back and the ties had been loosened. The weather was, if anything, a little too hot, though the happy couple had the best seats for the service under a shady parasol. Once the cold Pimms started to flow, however, even that small irritation was gone and it was really hard to fault a thing.

Well, okay, there’s one thing. Technically, by the time we had arrived, the couple were already married. Now admittedly it was “only” the legal ceremony, with the religious side to be witnessed by us all, but I’ll admit to feeling a little cheated by the sleight of hand — err, ring.

On arrival I actually didn’t know anyone there, but when stopped by the photographer one of Sam’s uni friends bounded over and offered to join me in the picture. It turned out her friends were all driving down and had been delayed (impressively managing to miss the wedding service itself) so we headed in together and I caught up with Mark (who hated his year in Japan), Guy (who is about to do a musical in Edinburgh) and Phil H (who is still Phil H). After the ceremony the festivities continued with good food, liberally flowing wine, a little dancing and much merriment for all.