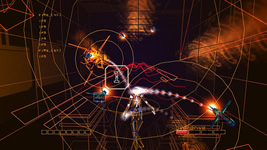 The latest addition to Xbox Live Arcade is easily one of the best yet, despite being a high definition remake of a game about seven years old. At it’s core it’s a wireframe rail shooter (where the player does not control the character’s movement, only their aim). Set inside a computer system, the player aims to reboot a rogue AI, destroying any viruses and firewalls they come across. Aside from its visual style (now totally free of the jagged edges from previous versions) what really sets it apart is its trance/techno soundtrack. This moves it into “stoner game” territory (examples such as Jeff Minter’s recent Space Giraffe had totally put me off) but there is an intelligent depth to its implementation. Each section starts with a basic beat and then with each level completed it adds an additional track, so by the time you reach the boss you are absorbed in a layered world of sound. On top of this while shooting down enemies you add small sound elements depending on the number you hit at once (from 1 to 8). It becomes an experience so you often aim to take out 4 or 6 instead of the maximum because it sounds better. 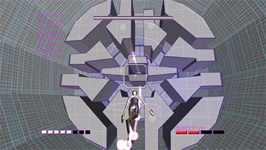 The thing that takes it further into the psychedelic realm is the vibrations. Unsurprisingly the controller you use vibrates in time with the music, but more interesting (read: weirder) is that you can set up several additional controllers to vibrate independently in time with different soundtrack layers as well. These can be positioned around one’s body like the back. I assume the intended purpose is not quite as explicit as the trance vibrator packaged with the Japanese PS2 release of Rez. It’s all very difficult to describe so I was fortunate that there was enough buzz around the game to convince me to download the demo, which in turn convinced me to purchase it shortly thereafter. This is undoubtedly as much art as it is game. At a bargain price of around £6, it’s impossible not to recommend and is fine example of how the Live Arcade platform should be used. In fact it earned a perfect score from 1UP.com.

Away from the Xbox this week has been spent preparing a “Consolidation Transaction”, BPP’s form of enforced group revision that everyone feels is largely a waste of time. Instead of preparing and giving a presentation on small pockets of the course, actual revision would undoubtedly be a better use of our time. In fact sleeping would probably be a better use. Kirsten’s friend Jolanda has been staying with us for a few days, watching a lot of quirky TV comedies like Green Wing, older cartoon comedy God, The Devil & Bob, and Reaper. All are highly recommended.