Rebel Without A Pulse

Stylish humour in games is hard to get right, but the real mystery is not so much how to make it work, but the fact that when it does, the games disappear into obscurity. The humour from the Sam & Max era that disappeared around the time of Grim Fandango has never properly re-emerged. Even when mixed with great gameplay and a decent story, as in Anachronox or Planescape: Torment, commercial success sadly still seems to evade such titles (I do hope you noted and appreciated the melancholy sibilance). Stubbs the Zombie is the latest such humorous creation that is both stylish and funny, allowing you to play the part of the zombie you usually blow away with a double-barreled twelve guage. Subtitled “Rebel Without A Pulse”, the games irreverent slant is clear from the start, rending limbs, eating brains and using body parts as weapons in a 1950s setting with a great musical accompaniment. Although the game is apparently somewhat flawed in its mechanics, this fantastic cinema trailer alone makes it seem worthwhile. 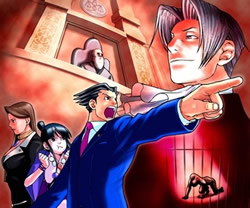 Meanwhile for anyone struggling under the burden of selecting Christmas presents, GameSpot have generously stepped in to help with their Holiday Gift Guide. You select what sort of person your buying for and they provide a list of appropriate games with ratings. For someone like me it might suggest Phoenix Wright: Ace Attorney (no, I swear I’m not making this up), only you’ll have to buy me a Nintendo DS* to go with it too. The game is about a “rookie defence lawyer” with “the wildest cross-examination skills in town,” utilising the DS touch sensitive screen to investigate crime scenes and cross-examine witnesses in five cases. It’s certainly an original concept and beats traditional exam term revision if you ask me… 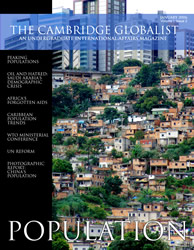 Meanwhile the second issue of The Globalist is fast becoming a reality. The final edits of the articles are trickling through to the production team now and two pages are already complete. The coming issue’s theme is population and whilst I can’t divulge anything about the content, I figure once again I’ll let you see a sneak preview of the cover. Selecting an image was hard for this issue, wanting to avoid the clichés of people of different colours or an average Tokyo crowd. I tried looking at a few pretty cityscapes and then some impoverished slums but nothing quite worked. Then I thought, what if I could have both. So I tried Brazil. The city I settled on is Belo Horizonte, a large city with a sprawling slum quarter tumbling down the hillside.

Downing students should check out the Howard Proposal with attached plans and decide if that’s likely to be useful to students.

*No, seriously. Buy me a DS. Me love you long time?

Friendly Advice From A Lion