Work went surprisingly well, given the preceeding night’s shenanigans. The office has a quiet but relaxed atmosphere; not too strict or oppressive and lunch breaks can be taken whenever you choose. The work itself is not as I expected. The technical side which I expected to cause problems is actually very straightforward. Instead it’s a the wordy side full of heavy insurance terminology that proves more difficult. It’s not too bad for me given my legal interest, but the other temp with whom I’m working is finding it more of a challenge. It’s mostly dull but I’m just focusing on the money…

The money is actually rather important given that I just spent about one and a half grand on a laptop a few days ago. It’s a strangely custom-designed beast from Dell, that is not precisely what I wanted but very close. I won’t apologise for being overly technical here, so either keep up or go read something else. A P4 3GHz processor would have been ideal, but Dell’s highest spec Inspiron laptop which features that chip is a bulky monstrosity that’s too noisy and not portable at all by most accounts. Therefore I dropped down to the Inspiron 8600 range which only allows an Intel Centrino 2GHz processor at best. Why not grab one of the great in-store deals then? Well, the computer had to be custom made because of the inordinate amount of RAM I’ve squeezed into it. The stores offer a maximum of 512MB and the machine I’ve ordered has – well – double that. A gigabyte of RAM. Has a nice ring to it. Essentially it means I can multitask to my heart’s content, as well as some serious graphic editing without having to worry about running out of memory and crashing. 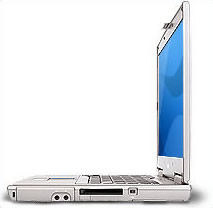 It is due to arrive in a little over a week, and I couldn’t resist ordering Unreal Tournament 2004 and Doom3 in advance…